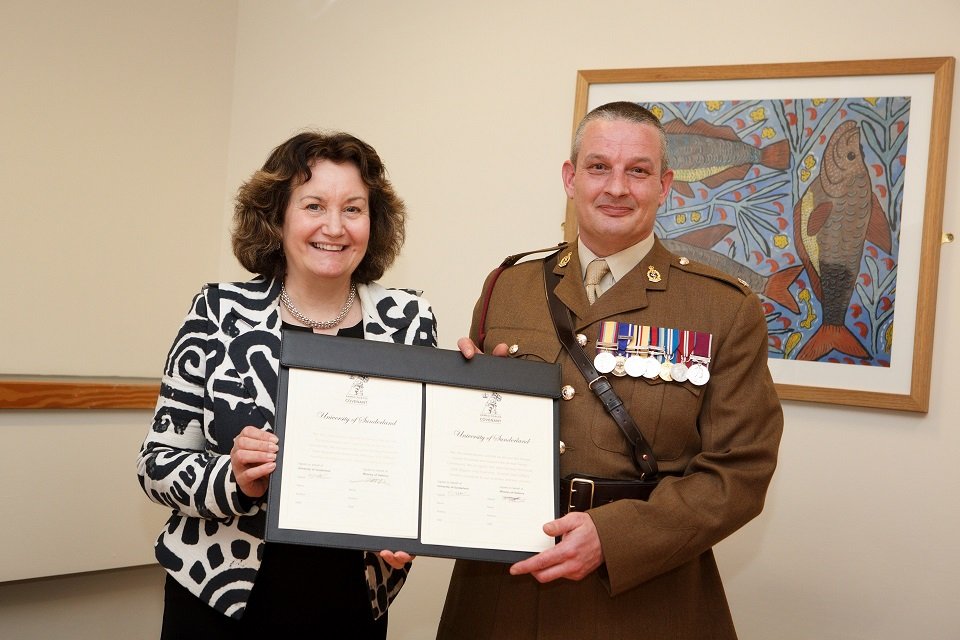 Thousands of Armed Forces veterans returning to the North East after fighting for their country are set to get the extra support they often need.

Every year, Army, Navy and the Royal Air Force personnel return home to the region after leaving the Services.

But returning to Civvy Street is not without its problems. In some cases the veterans, or those injured in the line of duty, find it difficult to cope with life outside the Forces, and in many cases need extra support and help to re-adjust.

Now, the University of Sunderland has stepped up and agreed to sign the Armed Forces Covenant pledging to offer that support to these men and women.

It is hoped the University can play a key role is helping these veterans, young and old, get back onto the career ladder.

WO1 Dennis Mustard, of the 251 Medical Squadron, based at Dykelands Road in Seaburn, Sunderland, said the signing of the Covenant sealed a longstanding relationship between the University and the Forces.

He added: “Often, those leaving the Forces don’t realise that further education could be an option for them, that they could re-train.

“By signing this agreement, veterans feel like that option is there, that there are people looking out for them.”

The Covenant was signed by Shirley Atkinson, Vice-Chancellor of the University of Sunderland.

Commitments made by the University include helping to establish employment opportunities for Service leavers and recognising the unique skills many possess in suitable educational programmes.

Major Thomas McVey, from 251 Medical Squadron, added: “This is a representation of the commitment of the University of Sunderland.

“The city is an area we recruit from, so it is an area Service personnel return to.

“We are pleased the University has agreed to do their bit in helping veterans feel good that they are returning to a supportive environment.”

After years of having their career mapped out for them, when it is time to leave the Forces, many personnel have to consider things that they have never needed to think about before.

From smaller issues like filling in forms, to big things such as where their family will live and their next career move.

Whatever the circumstances of their transition, it’s likely that many Service leavers will face some challenges and experience anxiety about what the future holds.

Professor Tony Alabaster, Academic Dean in the Faculty of Health Sciences and Wellbeing, said: “We believe that those who serve in the Armed Forces, whether Regular or Reserve – should not have to face any disadvantage compared to other citizens in the provision of public and commercial services

“Here at the University we recognise a moral obligation to the members of the Naval Service, the Army and the Royal Air Force, together with their families. They deserve our respect, support and fair treatment.”