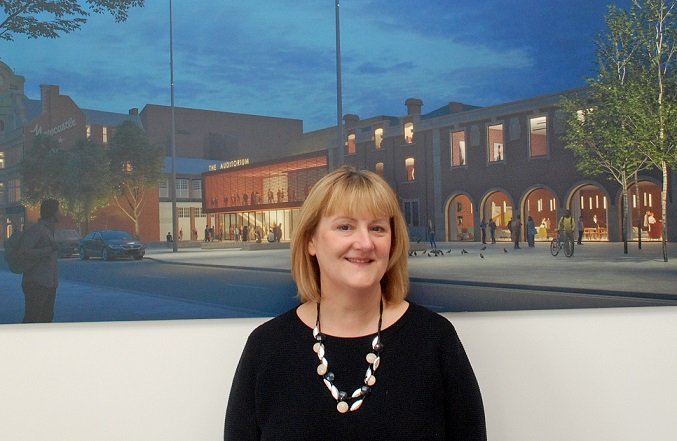 A leading figure in Wearside’s burgeoning cultural sector has taken on a new role at the organisation responsible for building on the momentum created by Sunderland’s bid to become City of Culture.

Helen Green, who was appointed Director of The Fire Station last year having previously been Creative Director at Arts Centre Washington, has moved into the role of Sunderland Culture’s new Head of Performance.

Formally launched earlier this week by Sunderland Council, the University of Sunderland and the MAC Trust, Sunderland Culture will strategically lead cultural venues, including The Fire Station, owned by its partners and develop and deliver large-scale cultural projects.

It has National Portfolio Organisation status, which means it receives regular funding from Arts Council England.

“It’s an exciting role, a totally new challenge and a great opportunity at an important time in Sunderland’s cultural development,” explained Helen.

“I’ll be responsible for the strategic overview of performing arts across the city at Sunderland Culture’s venues, including The Fire Station and Arts Centre Washington (ACW),” she added.

Manchester-born Helen started her career in the arts working on West End hit Starlight Express after studying an English degree in Birmingham.

She went on to become General Manager at the National Youth Theatre of Great Britain in London before leading an arts venue in Edinburgh.

She moved to the North East in 2001 when she was appointed General Manager at Theatre Sans Frontieres in Hexham, before becoming Creative Director at ACW.

Helen was given the role of Director of The Fire Station early last year and as well as fulfilling that role has more recently been working on producing and delivering an arts and culture programme for the visit of the Tall Ships in July.

“My focus at the moment is on delivering the best possible programme to thrill local and national audiences coming to Sunderland to enjoy the spectacle of the Tall Ships.

”But I’m starting to think about programming exciting, challenging and appropriate performances for Sunderland Culture’s venues.

”I’d also like to build on the success of Sunderland Stages by looking to programme performances into places you wouldn’t normally associate with the arts,” said Helen.

“I also have ambitions to find the resources needed to commission work in the city, so we can not only bring the very best artists and performers into Sunderland, but we can also develop and promote local artistic talent.

“I think developing, encouraging and allowing local talent to grow will be a big part of my role,” she explained.

Work on the new 450-seater auditorium adjacent to The Fire Station is due to start later this year, with curtain up on the opening night being late next year or early 2020.

“I’m already contributing to planning for the opening season of the auditorium – it’ll be something special.

‘’Taking a broader view, I want to provide opportunities for the city’s wide range of community performing arts groups and I also see developing new audiences as a real priority.

“We need to make sure that performances appeal to both the heart and the head, intellectually and emotionally, that they make people think and feel.

”And of course, the performances must be for everyone in the city, appealing to all of our diverse communities.

”Hopefully, if we do that, and are giving platforms to local, national and international artists and performers, the audiences will follow.”

Keith Merrin welcomed Helen into her new role: “Helen’s appointment is another step forward – her knowledge and experience in a range of senior roles in the arts and culture sector will be an asset to Sunderland Culture, and she’ll bring an energy and dynamism to the important area of performance.”