On the right road… 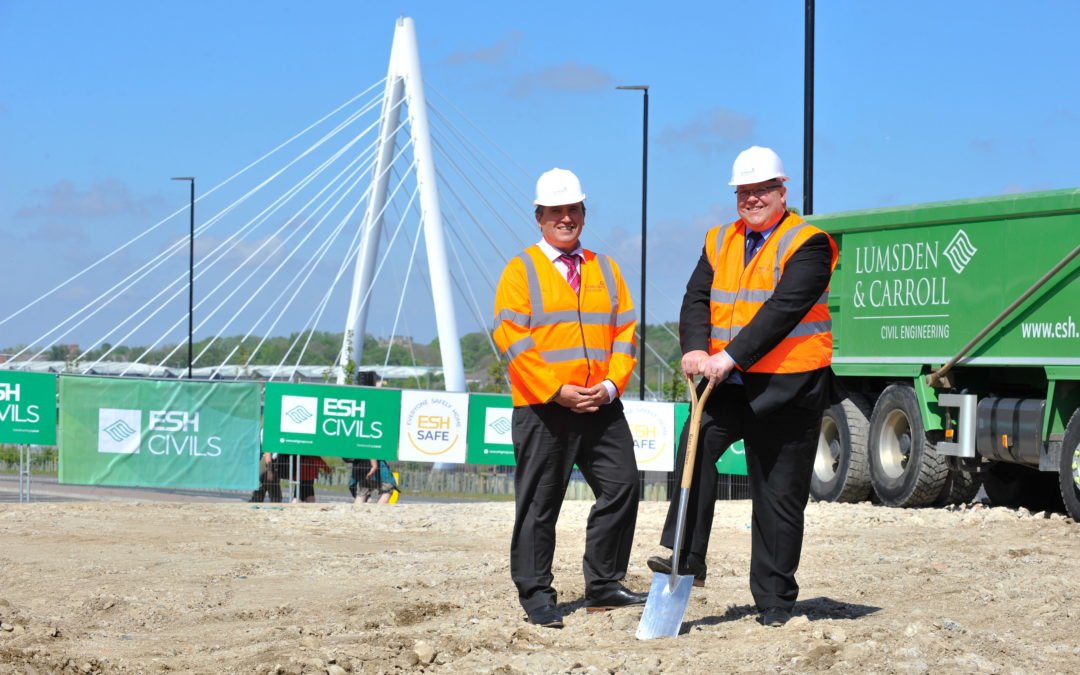 Construction work is beginning on the next phase of a multi-million pound project of improvements to Sunderland’s road network.

The third phase of the Sunderland Strategic Transport Corridor (SSTC 3) begins at the southern end of the Northern Spire. It is a dual carriageway through Pallion, running underneath the Queen Alexandra Bridge, into Deptford and onto the city centre and St Mary’s Boulevard.

A £40.5m Government contribution towards the £70.8m project was confirmed in March this year. Council capital funding of £16.9m, an underspend from the Northern Spire project of £7.8m, and a DfT local transport grant of £5.6m all contributed to the project.

The £35m construction contract has been awarded to civil engineers Esh Civils, the civil engineering division of Esh Construction. Works compounds are now in place and the public will see more large-scale clearance and ground works in coming weeks and months.

Utility diversions and preliminary works are already underway. Earthworks have begun at the western section of the scheme including the excavation of the former ‘Mayflower’ building and filling to the rear of the existing ‘Sunderland Wall’.

The new carriageway includes utility upgrades to accommodate current and future demand. It will take up to 27 months to complete the works with a target opening of Autumn 2021.

Leader of Sunderland City Council, Councillor Graeme Miller said: “As a city, we cannot stand still. We have to develop and we have to invest in our infrastructure. The dual carriageway here is a long-term investment project from the council that has received widespread support in the city, in the region, and from the strong business case that we put to ministers and the Department for Transport.

“This strong case was backed by the Government with a major allocation of funding in March this year.

“Now, working closely with our main contractor Esh Construction we are breaking new ground and once again improving our city’s connectivity.

“The dual carriageway and the whole transport project corridor, including the magnificent Northern Spire, is about improving access across Sunderland and opening up more land that can be developed for housing and business.”

The scheme’s design takes into account the land’s former use, its geology and gradients as it includes the construction of 1.2 miles (2kms) of retaining walls and structures with a retained height in excess of 36ft (11metres).

Main contractor Esh is leading on the design of all retaining walls throughout the project. This design has been on-going since March and the procurement of more supply chain and materials begins next month.

Steve Conn, Divisional Director of Esh Civils said: “Esh Civils is extremely pleased to have been selected to construct the next phase of carriageway linking the Northern Spire and city centre.

“We have a proven track record of infrastructure delivery across a range of sectors and have established a first-class team of professionals to work with our client and our local supply chain to deliver this project.

“Works have commenced in earnest this week with major earthworks, and structures works will start shortly to form the land areas required for the new carriageway.”

Esh has its HQ in Durham and part of the council’s contract award includes local business, employment, training and educational opportunities. More details on these will be highlighted in coming months.

Andy Radcliffe, Esh Group’s Chief Executive said: “We are very proud to have been appointed to deliver the next phase of this hugely important project which will stimulate growth, create jobs and attract investment to our region.

“We look forward to building our Civils portfolio and maintaining our standing as one of the region’s leading contractors. The contract award represents a strong start to 2019 and is a key milestone in Esh’s growth plan.

“Sunderland City Council’s decision to procure via NEPO (North East Procurement Organisation) ensures social value will be created as a result of the ongoing works, benefiting the local community, not only during the project but long after its completion.

“The scheme will deliver a comprehensive Social Value package which includes training and employment opportunities for local residents, support for local primary and secondary students, work experience placements for college and university students and a number of full-time jobs.”

Esh is the only civil engineering contractor in UK to hold the Queen’s Award for Promoting Opportunity and Social Mobility. It is committed to appointing a local supply chain and employing a local workforce who will work out of the Sunderland project office at The Ropery and its Durham HQ.

Mark Jackson, the City Council’s Assistant Director of Infrastructure, Planning and Transportation, said: “The strategic transport corridor has been one of the council’s major priorities for several years. It’s long been recognised that improving our cross-city connections from the A19 business corridor and into the city centre and the Port of Sunderland is going to attract investment and create more regeneration.

“The council has worked closely with businesses, with the public and in its design partnership with Capita on this important project.

In the March announcement that confirmed funding, Roads Minister Jesse Norman said: “Sunderland is a great city with a great future.”