Fashion pod becomes a fright at the Bridges 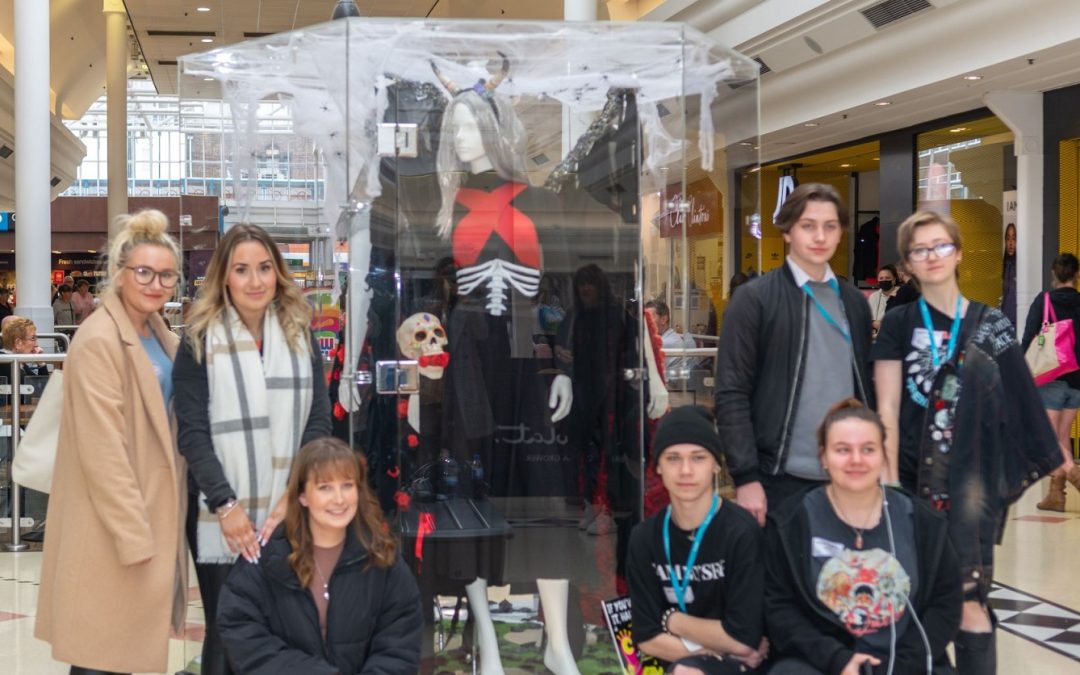 Sunderland’s city centre display, which highlights the latest fashion looks, has taken a frightening turn – thanks to students from Sunderland College.

The fashion pod is a joint initiative between the Bridges and Sunderland BID, with the large glass case regularly changing to reflect new season offerings.

But now, in the run up to Halloween, the pod has taken on a far more sinister look, with a number of bespoke costumes created by fine art students from Sunderland College.

The students have created a number of eye-catching spooky outfits, which have been dressed on mannequins and bring a real flavour of the scariest time of year to the shopping centre.

And that means that visitors to the Bridges can really get into the spirit of the season, ahead of the city’s Lights Out festival which will see giant inflatables across buildings and culminate in a Halloween Parade.

Karen Eve, Centre Director at the Bridges, said the students had done a first class job.

“The clothes they have created are perfect for Halloween and, even though they’ve only been in place for a couple of days, they are already creating a lot of attention,” she said.

“Shops in the Bridges are now full of items for Halloween so, using the fashion pod to reflect this time of year and giving the college students the chance to showcase their skills, is a great initiative.”

Her words were echoed by Sharon Appleby, Chief Executive of Sunderland BID, which organises Light Out.

“Halloween has become a really important time of year in the city and we’re continuing to grow that experience,” she said.

“To be able to get the students involved in not only creating costumes but also in dressing the pod is a new addition for this year but one which we’re sure everyone will enjoy.”

Twenty four year two students on the Art and Design BTEC course at Sunderland College were tasked to create masks, costumes and props that could not only be displayed in the fashion pod but which would also be used in the Halloween parade.

Working with carnival agency, Creative Seed, which is overseeing the parade, the students were asked to use Day of the Dead as their theme and had three weeks to produce the clothes and props.

“The learners worked incredibly hard on this brief, putting in additional hours to ensure that they would meet the needs of the client,” said Hollie Marshall, lecturer in the creative arts at Sunderland College.

“The learners worked confidently and professionally in production and installation of the work, displaying the industry standards we instil into our learners.”