Work underway on The Yard 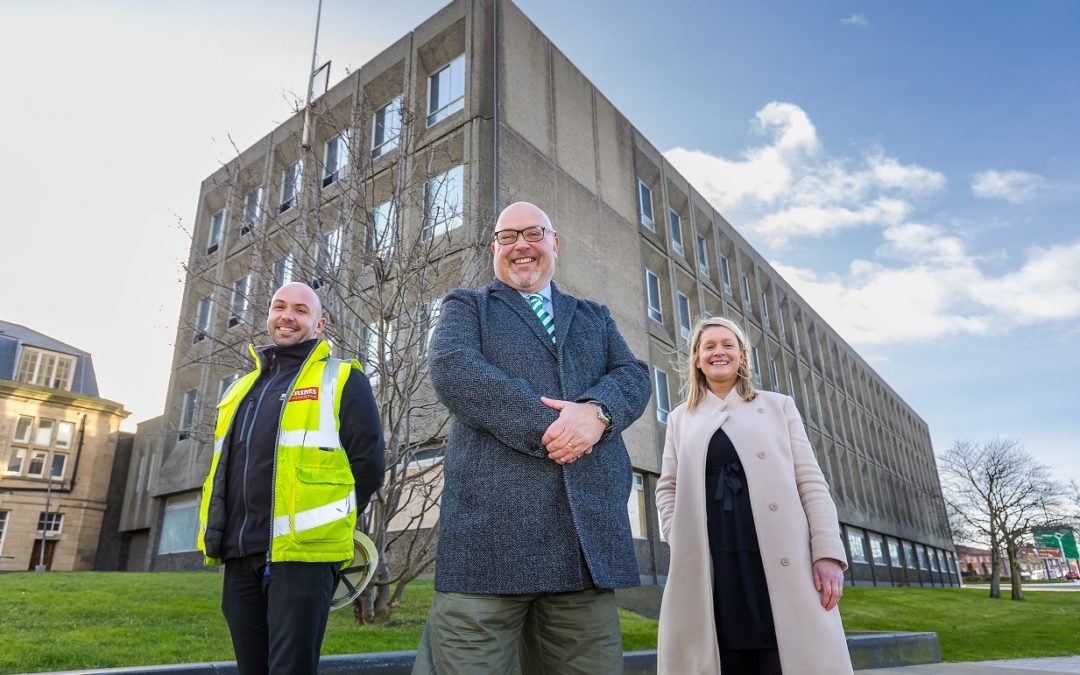 Work to transform a distinctive former police station into a stylish new office block is underway, with a Sunderland construction partner appointed.

North East developer Hanro has engaged Sunderland based Brims to carry out work on the former Gilbridge Police Station, which will be renamed The Yard when it opens its doors in the summer.

A comprehensive £3.5million refurb will be carried out by Brims Construction Limited, creating a modern office base for companies of all sizes.

A planning application was approved last year to convert the premises to offices with proposed facilities such as fitness space for workers based within the workspace, as well as an open business lounge and bookable meeting rooms.

The building had been owned by Sunderland City Council but was sold to allow Hanro to enhance the Riverside Sunderland area, with a programme of improvements that will attract more businesses into the heart of the city, providing a boost to city centre traders and complementing the office spaces being created on the former Vaux Brewery site.

There are expected to be some changes to the external fascia of the building, as well as a full internal fit out.

The Yard’s development is the latest in a long line of positive investment announcements in and around Riverside Sunderland, which is springing back to life as a mixed-use urban quarter, where people will live, work and play.

Laura Lloyd, who is leading development on behalf of Hanro, said: “We’re proud to be working with a Sunderland firm to carry out the refurb of a building we’re confident will attract more businesses to the city centre, complementing the large scale office developments on the former Brewery site.

“It’s clear to see the pace and scale of change underway in Sunderland right now, and we’re proud to be playing our part in that, bringing forward a development that will further enliven a transforming part of the city.”

She added: “Riverside Sunderland is becoming a vibrant business district, and it’s exciting that we are creating opportunities for ambitious companies to be part of it, and to stand as part of the same community as brands like Ocado and Hays Travel, who have made this their home too.”

The company appointed Brims to deliver the work, which is now underway. The firm, which is based at Quay West Business Park, recently completed the construction of the 450 seater Auditorium, which is just a stone’s throw from The Yard.

Richard Wood, director of Brims Construction, said: “It’s great to be involved in the redevelopment of such a well-known building, which has now found itself in one of the city centre’s development ‘hot-spots’.

“We’ve worked collaboratively with Hanro and their team on the scheme since late 2020 and this will be the third major project we’ve undertaken recently in this part of the city alongside the offices for Hays Travel and the new Auditorium.

“It’s exciting to see a developer like Hanro get involved in offering more quality office space in this area.”

The 3,000 sq m building builds on Hanro’s impressive track record of developments in Sunderland, with the firm having invested more than £20m in Sunderland over the last five years, including the development of retail space in Trimdon Street.

The Yard will provide smaller offices for growing businesses, with suites starting at 45 sq m set to be available for rent.

Councillor Graeme Miller, leader of Sunderland City Council, said: “We’re really pleased to see work advancing on The Yard, which will be a great addition to the city’s office space market.

“We have seen the success of similar developments in the city, with more and more businesses attracted to our transforming city centre, and we look forward to seeing The Yard open its doors and welcome more businesses and business people to Sunderland.”

Up to £500m of development projects are set to be on site at Riverside Sunderland this year, with work expected to get started on the first of two Legal & General offices within weeks, as well as a new multi-storey car park, the new pedestrian crossing over the Wear, and 132 ultra-sustainable homes – the first of 1,000 that will eventually stand on the site.

To stay up to date with the latest developments at Riverside Sunderland, check out www.riversidesunderland.com or follow @RiversideSund on social media.