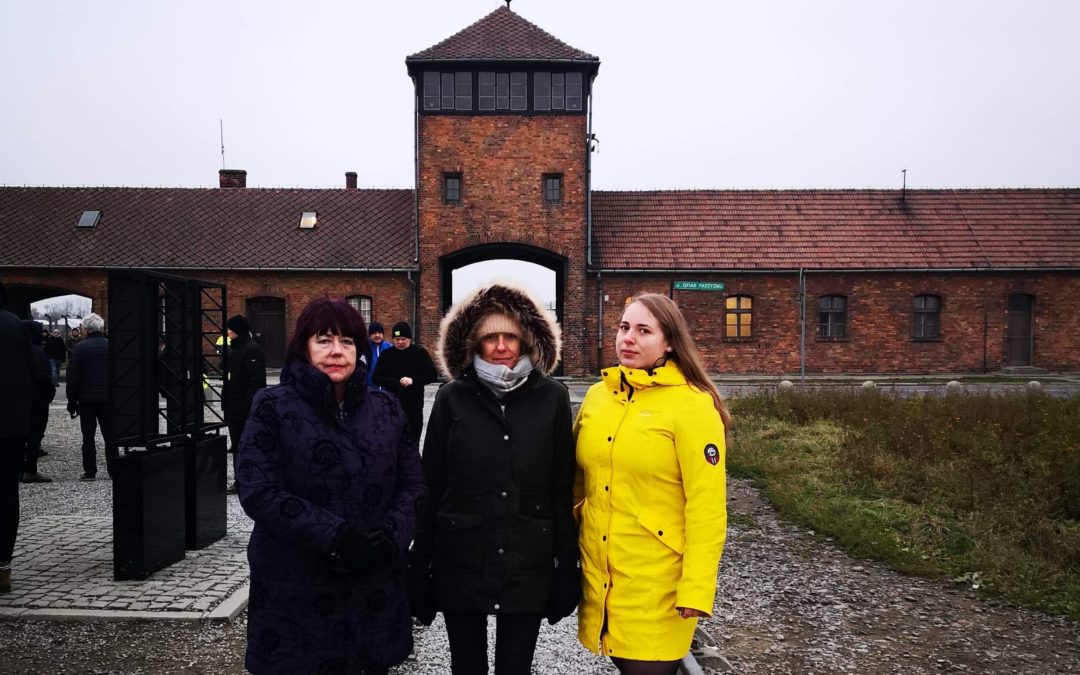 The Dean of the Faculty of Education and Society and Students’ Union Presidents joined over 100 university leaders and students at Auschwitz this week, as part of a new initiative to tackle antisemitism in universities.

The Government-funded visit, organised by the Holocaust Educational Trust and the Union of Jewish Students, took student leaders and senior staff from almost 50 universities to Auschwitz. The £144,000 grant was announced earlier this year by Sajid Javid, then Secretary of State for Housing, Communities and Local Government.

Dr McKenna said: “The project, the first of its kind open to university senior leaders and SU sabbatical officers, was funded by the Government in the wake of its concern at the rise in reported antisemitism, prejudice and hatred on university campuses. It aims to help educate about the importance of understanding where hatred can ultimately lead.

“The opportunity to hear the moving testimony from 88 year old Susan Pollack, before embarking on a one-day intensive visit to Auschwitz-Birkenhau, set the scene for a most moving and profound experience.

“I am very pleased that our University, which places equality and diversity in its core values, could participate in this project.”

Students’ Union President of Wellbeing Mandi Purvis said: “As we marched along the selection ramp in the bitter cold and darkness, as we entered the undressing area and proceeded into the gas chamber, we followed in the footsteps of millions and thought about all those individual victims who were murdered there.

“To eradicate hate, bullying, isolation and the unthinkable atrocities that happen today, we need to learn about where hate comes from and actively stand up for those who have no voice. This was a very emotional and valuable experience that is hard to put into adequate words, yet speak we must as the victims of Auschwitz should never be forgotten.”

Diana Tretjak, Students Union President of Education, added: “What has happened to 6 million innocent people is absolutely unbelievable and terrifying. I’m glad to have had that special chance to see the camps myself, to hear testimonies of survivors and I believe this should never be forgotten.

“I’m looking forward to spreading the word across the campus as well as working together to educate others about what has happened and what may be done in the future.’

The Community Security Trust, which monitors antisemitism, has recorded 112 incidents on UK campuses in the past five years – including 20 last year – such as graffiti and verbal abuse.

“The government recognised there’s a piece of work to do regarding how we tackle antisemitism on campus. One way of doing it is education, so they gave us a one-off grant. I hope we can demonstrate that this is worth doing again,” said Karen Pollock, Chief Executive of The Holocaust Educational Trust.

“There is a ripple effect to people learning, hearing, seeing.”

The students and staff will reconvene with trust educators next week for a follow-up seminar to discuss what they learned from the visit and its personal impact on them. Participants have agreed to become trust “ambassadors” in their universities to raise awareness of the Holocaust and challenge antisemitism and other forms of racism and prejudice.