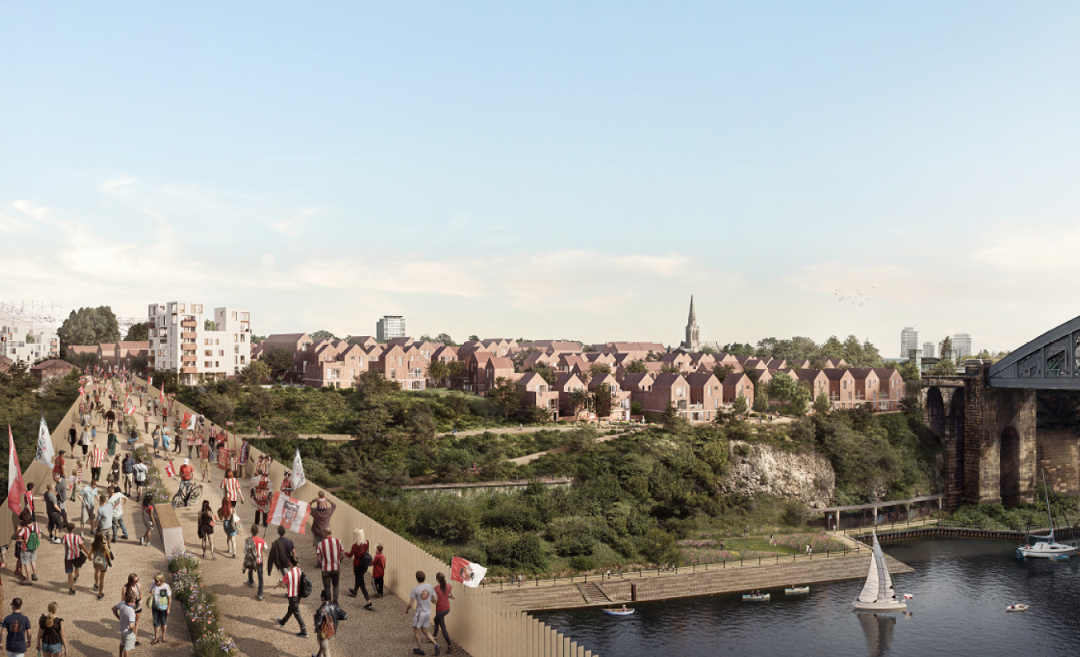 Three major schemes at Riverside Sunderland are expected to pass through planning next week.

A high-level pedestrian footbridge, 132 new homes – the first of 1,000 that will stand on the site – and new parking provision are all expected to be approved at a Sunderland City Council Planning Committee on Monday, March 29.

The £31m ‘smart-bridge’, plans for which were announced last year, will connect the transforming former Vaux Brewery site to Sheepfolds, providing improved links to the Stadium of Light, the two University of Sunderland campuses in the city centre and St Peter’s, and residential communities to the north of the river.

The bridge will feature creative lighting and augmented reality, allowing people to use their smartphone to see virtual displays that council bosses say will create ‘an experience that will really bring to life the city’s digital ambitions’.

It will provide access to both pedestrians and cyclists creating improved connections between the city centre and the coast.

Outline plans for the footbridge show a simple, elegant design that will frame the Wearmouth Bridge and complement the changing cityscape on Riverside Sunderland.

The residential scheme that is also passing through planning comprises 132 properties – a mix of 1, 2 and 3 bedroom new homes – on land overlooking the city riverside.

The application sets out proposals for a sustainable new community, which is due to be completed by 2023, in time for the Sunderland Future Living Expo, a public event that will showcase a new way of city living and the transformation of Riverside Sunderland into a vibrant new place to live.

Proposals are for 91 houses and 41 apartments designed by architects Proctor & Matthews and MawsonKerr.

The scheme will provide spacious eco-friendly smart homes, built using modern methods of construction, that will include a variety of amenity spaces, including terraces, courtyards and communal gardens.

And an application is also set to be reviewed for an eye-catching 650-space multi-storey car park on the Riverside Sunderland site.

The multi-storey facility – which will be illuminated with colourful lights and features a stunning ‘living wall’ – will be located on Farringdon Row and will be the latest addition to support the delivery of Riverside Sunderland, a new urban quarter overlooking the Wear.

The multi-storey car park (MSCP) will cater for the increased number of people who will live, work and play in the city, as regeneration advances at pace.

Councillor Graeme Miller, leader of Sunderland City Council, said: “The rate at which planning applications for this important development are going before committees sets out the scale of our ambition for Riverside Sunderland, while the quality of these proposals demonstrates our commitment to create something world-class, working with award winning architects to ensure that Riverside Sunderland is a place we can all be proud of.

“These schemes will quickly advance if they’re passed through planning, so by 2023, the Riverside will be transformed.

“With plans for a new state of the art Eye Hospital and two high-quality office buildings from Legal & General advancing too, there is now only space on the former Vaux site for two further commercial developments, which demonstrates the pace and vigour with which we have delivered, since the first development – The Beam – completed in 2019.”

The ambition for Riverside Sunderland is to create a world-class place to live, work and play at the heart of the city, with the area eventually becoming home to 2,500 new residents and 10,000 workers, who will bring with them spending power that will boost the economic fortunes of the city centre.

The programme, which has been described as the ‘the most ambitious city centre regeneration scheme in the UK’,  extends beyond the Vaux site, with High Street West, Farringdon Row, Galleys Gill and Sheepfolds all set to be transformed creating the first carbon neutral urban quarter in the UK.

If approved, all three developments are set for completion during the first half of 2023.

To stay up to date with the latest developments on Riverside Sunderland, visit www.riversidesunderland.co.uk or follow @RiversideSund on social media.