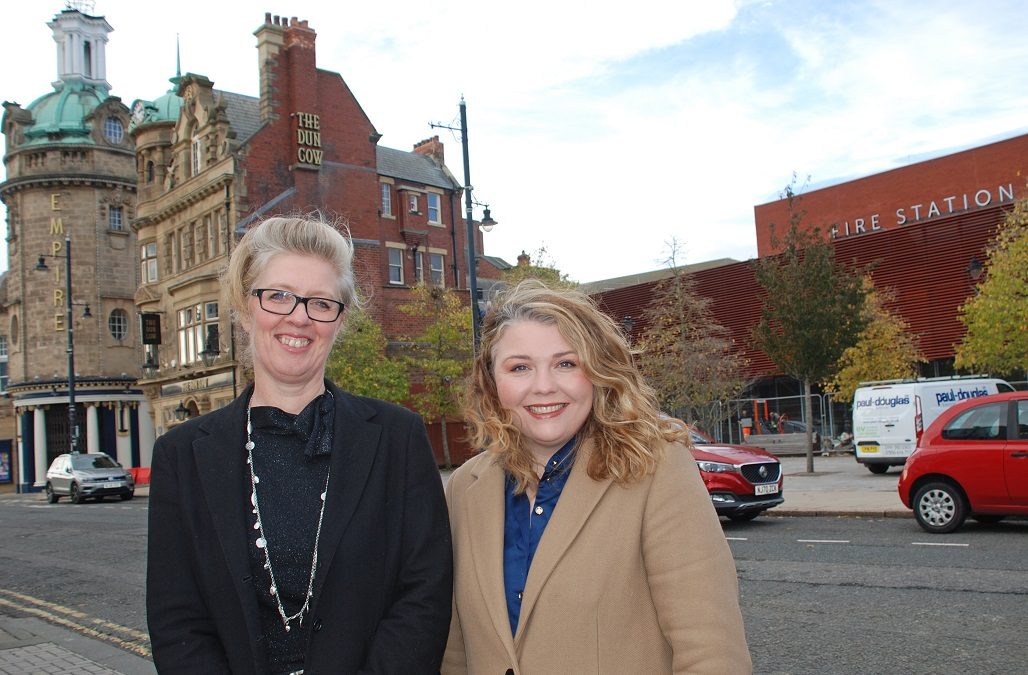 The director of Sunderland’s oldest theatre has warmly welcomed the latest addition to the city’s cultural community – and her new next-door neighbour.

Marie Nixon, Theatre Director at the Sunderland Empire has welcomed Tamsin Austin, Director of The Fire Station and said she was looking forward to working together on developing the performing arts offering to their audiences.

Marie said: “I am thrilled to welcome The Fire Station and Tamsin as our new next-door neighbour.

“As one of the longest standing and largest performing arts venues in the North East, it is a delight to welcome the newest; a fabulous addition to Sunderland’s vibrant live theatre, arts and cultural offering.

“With a plethora of live productions, events, and creative learning opportunities between us, Sunderland is fast becoming the premium destination for everything performing arts, from theatre to music from comedy to dance.

“People across the North East and beyond now have the ability to experience productions of all scales, whether it’s a massive, must-see West End show or a more intimate evening supporting the local music scene.

“Between the Sunderland Empire and The Fire Station, there truly is something to cater for everyone.

“I’m really looking forward to working with Tamsin, supporting emerging creative practitioners, generating pathways into our important industry through exciting new roles, developing audiences for performing arts across the city and region, and bringing more people into our wonderful city.”

Tamsin added: “The iconic Sunderland Empire has been the cornerstone of Sunderland’s cultural offering for generations, and we’re delighted to have moved next door.

“A few years ago Paul Callaghan and the Sunderland Music, Arts and Culture (MAC) Trust had the vision of a new cultural quarter in the city centre, with the Empire at its heart.

“With the opening of The Fire Station, that vision is now a reality. The quarter now incorporates a landmark theatre capable of hosting the biggest and best West End shows; a brand, new mid-scale auditorium perfect for gigs, theatre, comedy, dance and spoken word performances; studios for dance and creative writing classes, as well as two completely revamped and renovated pubs which both have performing spaces.

“Within The Fire Station we also have bars and restaurants and next summer we’ll also be opening the Parade Ground, a space for outdoor performances.

“Collaboration will be at our core and I’m delighted about the opportunity to work with our neighbours the Empire – and others – to create an exciting and enticing offer for audiences and artists across our performance spaces.

“I’m particularly excited to be working alongside Marie – a hugely inspiring leader and advocate for Sunderland as well as a supporter and champion for emerging artists through her work with We Make Culture as well as Sunderland Empire. I certainly anticipate collaborating on making some great events and activity happen.”

Sunderland Empire opened in 1907 and is the largest theatre between Leeds and Edinburgh, with capacity to accommodate an audience of 2,200.

It is owned by Sunderland City Council, but operated by Ambassador Theatre Group. The popular theatre re-opened after Covid closure in early September.

The auditorium will programme up to 300 events a year – in music, theatre, comedy and dance.

It can host up to 550 people seated or up to 800 people standing and will bring acclaimed national and international artists to Sunderland, as well as showcasing emerging and established local performers.

The opening programme of The Fire Station Auditorium – Firestarters – was unveiled last month.

Kathryn Tickell and The Darkening will ignite the programme when they will be joined by special guest The Lake Poets for the venue’s opening gig on Friday, December 10.

On Friday, December 17, Mercury Music Prize nominees Field Music will present The Firestarters Revue, with a sensational line-up of guests including rising stars Martha Hill, Reali-T, Faye Fantarrow alongside Sunderland icons Barry Hyde and Ross Millard (The Futureheads) and Frankie Francis. Other performers for this very special housewarming for The Fire Station will be announced.

The Christmas season will come to a close with a party to end all parties with North East funk icons Smoove & Turrell (Sunday, December 19) fresh from their chart-topping seventh studio album, Stratos Bleu. The event will also include special guests the Voices of Virtue Gospel Choir, MC Kay Grayson and the Origin Crew dancers.