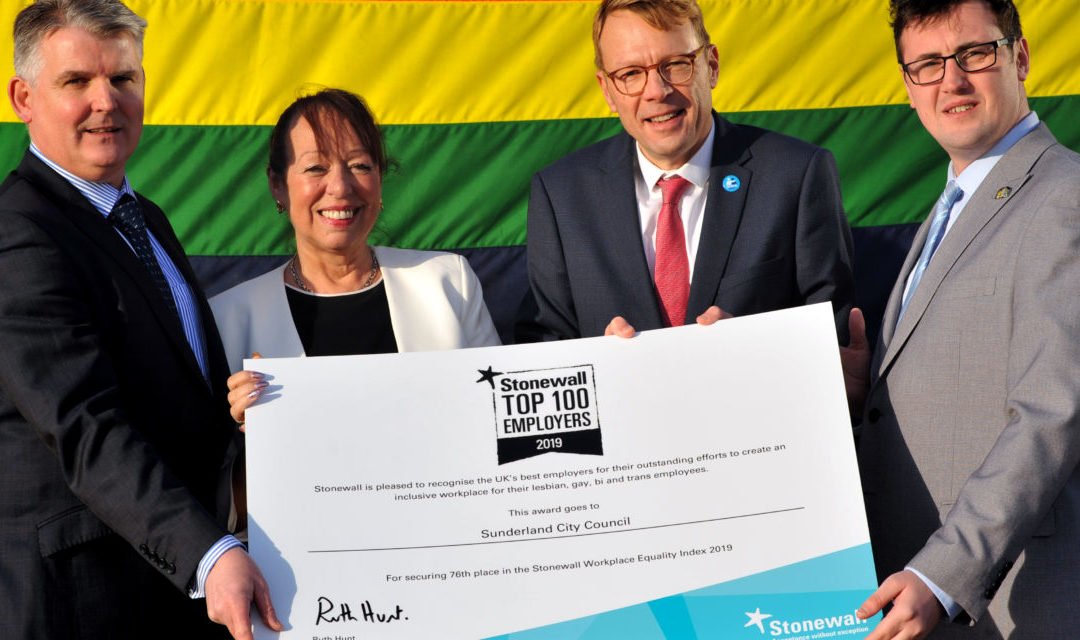 SUNDERLAND CITY COUNCIL has been named one of the best employers in Britain by lesbian, gay, bi and trans equality charity Stonewall in its Top 100 Employers list for 2019.

This is the first time the City Council has broken into the Top 100 after being ranked 76th in the list of the country’s most inclusive employees – up 71 places from its ranking of 147th last year.

Welcoming the news, Councillor Michael Mordey, Deputy Leader of Sunderland City Council and portfolio holder with responsibility for equality and diversity, said: “We are extremely proud and delighted of our achievement in making Stonewell’s Top 100 Employers and are very happy to join a number of Sunderland partners who have featured as high performers in this table.

“Sunderland always has been and continues to be a welcoming city. We have a long history of communities living and working together and we are proud to be a city that continues to embraces diversity and collaboration.

“Sunderland City Council and the employee Supporting Equality Network has done so much over the past year to help achieve this ranking and use the learning from Stonewall to improve equality for all. We will continue to innovate and improve to ensure we remain at the forefront of LGBT Inclusivity for both our staff and the people of Sunderland.”

Patrick Melia, the City Council’s Chief Executive, added: “I am very proud of the significant progress that the council has made in developing our approach to equalities and inclusion across the council. All too often lesbian, gay, bisexual and transgender people are not always supported to be open about who they are in the workplace which can not only impact on an employee’s performance but ultimately on their health and wellbeing.

“We are here to serve the residents of Sunderland and the fact that we are recognised in the top 100 employers is testament to our Council’s commitment to equalities. Our priority is on making Sunderland City Council a LGBT+ inclusive employer, and ensuring that our colleagues and residents feel the benefits of this work. It is fantastic that we’re able to spread this message of inclusion across a wider network with this recognition.”

This year’s Top 100 was the largest ever with 445 employers entering, demonstrating their commitment to LGBT workplace inclusion.

As part of the Top 100, Stonewall collects more than 92,000 anonymous responses from employees on their experience of Britain’s workplace culture and diversity. An overwhelming 93 per cent of non-LGBT employees who responded to the survey, say they understand why their employer is committed to LGBT equality.

Last year, Stonewall released research that revealed more than a third of LGBT staff (35 per cent) have hidden they are LGBT at work and almost one in five LGBT employees (18 per cent) have been the target of negative comments from colleagues because of their identity.

Darren Towers, Stonewall’s Executive Director said: ‘Sunderland City Council and all those who have made this year’s Top 100 Employers list are making a huge difference to workplaces, services and communities across the UK. LGBT-inclusive employers play a crucial role in changing society by using their power and influence to protect and support LGBT people. More than a third of LGBT staff (35 per cent) still hide their identity at work for fear of discrimination; that has an impact on productivity, wellbeing and more and shows we still have lots to do. However, with organisations like Sunderland City Council displaying such a strong commitment to LGBT equality, we are one step closer to creating a world where all lesbian, gay, bi and trans employees are welcomed and accepted without exception.’

Stonewall’s Top 100 is compiled from submissions to the Workplace Equality Index, a powerful benchmarking tool used by employers to assess their achievements and progress on LGBT equality in the workplace, as well as their wider work in the community and on service provision.

Each organisation must demonstrate their expertise in 10 areas of employment policy and practice, including networking groups, senior leadership, procurement and how well they’ve engaged with LGBT communities.