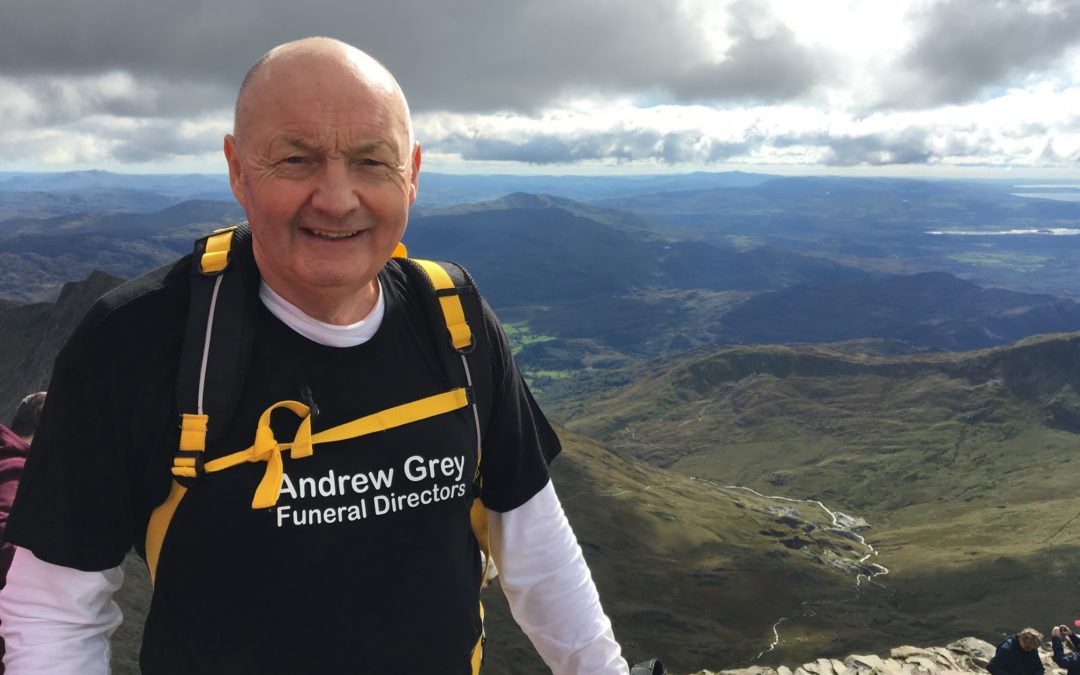 A 64-year-old bus driver from Washington has taken on the three largest mountains in Britain to help a community church in South Hetton near where he was born.

Alan Beck, a Stagecoach North East bus driver for 38 years, took on the challenge to climb Ben Nevis in Scotland, Scafell Pike in England and Snowdon in Wales over the course of one week to raise funds for a series of damaged windows at the Holy Trinity Church in Co Durham, which were vandalised over the past two years.

Alan grew up in South Hetton, and after accompanying his Dad to church every week, he became a regular member of the congregation and then a church warden. He was also confirmed and married at the church and his son and daughter were christened there, so Holy Trinity Church is very close to his heart.

This is not the first challenge that Alan has undertaken for his beloved church. As the roof at Holy Trinity Church is in desperate need of repair due to extremely bad weather, £50,000 must be found for restoration work and long-term repairs. Over £22,000 has been raised so far, with Alan contributing a whopping £9,000 when he completed a tandem parachute jump in October 2015.

Then in August last year, Alan attempted an even bigger challenge when he took on a coast to coast walk at over 100 miles. However, due to injury, he had to withdraw from the charity journey on day three. Despite offering to return the money, he managed to raise £3,000 as everyone was still proud of what he had achieved.

Alan thought that would be it for his church fundraising, as he explains: “We are currently waiting for permission to start the roof restoration work from the DAC at the Diocese, then we can look for grants to cover the remainder of the cost.

“Unfortunately, over the last two years, we have been hit with vandalism – not only the lead off the roof, which we were able to claim for – but damage to windows, so we need to raise up to £5,000 for covers to protect the windows.”

Overcoming his disappointment from not being able to complete the previous challenge and not to be defeated, Alan planned his next epic adventure, the three tallest mountains in Britain, which he said was the hardest thing he has ever done.

He continued: “Ben Nevis was my favourite – my first mountain climb. There was thick snow at the summit, which was the first snow of the autumn. Although after clearing the snow on the way down, I fell and damaged my ribs and right hand, it did not stop me carrying on and enjoying every minute.

“For Scafell Pike, I was joined by two lads from the depot, Kevin Brown and Shaun Rowley, who had climbed it several times before. They are both keen runners and went for a ten-mile run in Keswick, then had breakfast, before they even met me for the walk!

“But Scafell Pike was horrendous, with ever increasing mist on the way up and the GPS dropping out, due to no signal coming from the satellite. When there was a signal, it kept sending us in the wrong direction.

“Ultimately, we ended off having to climb four cliff faces with sheer drops. I know because I looked behind after scaling each one! We had to go up to find out where we were, in order to get back down. In the end, we reached Great End, which I have been told is only 200ft from the top of Scafell Pike. At this point, we realised how lucky we were still to be alive. I had certainly been doing a lot of praying whilst climbing those cliffs.”

At this point the visibility was down to 15ft so Alan and his fellow bus drivers began their descent.