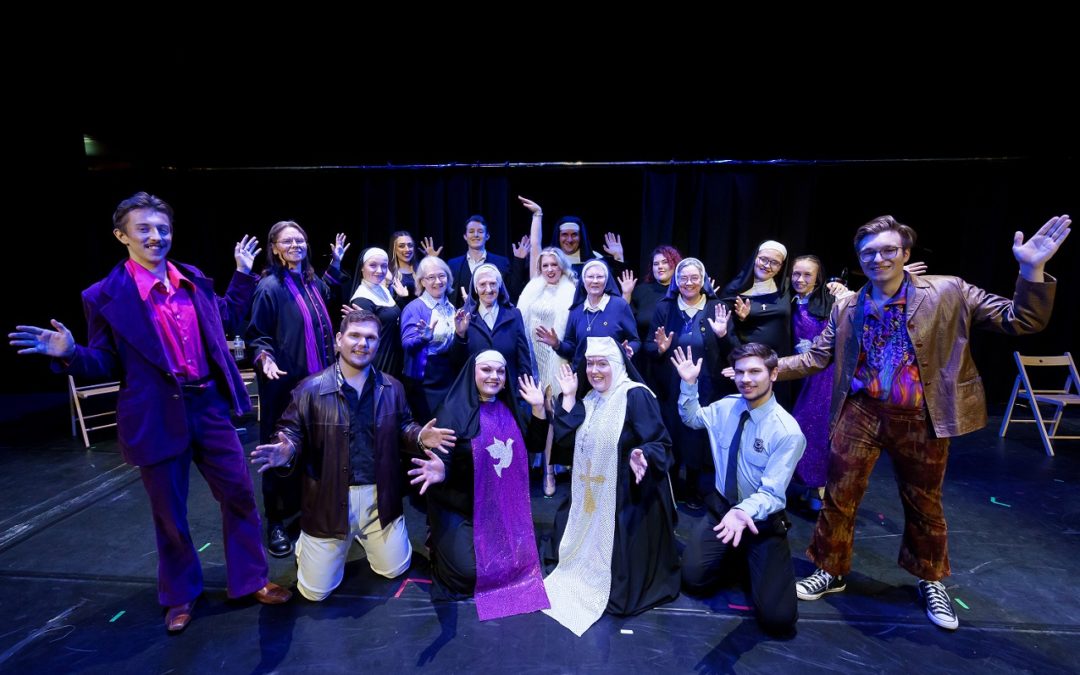 Nuns from a Sunderland convent met their showbiz counterparts after a performance of hit musical Sister Act at the city’s newest arts venue.

Performing art students from the University of Sunderland staged the feel-good comedy at The Fire Station over two days earlier this week.

Their first matinee performance was watched by a group of six Sisters of Mercy from the Oaklea Convent, who thoroughly enjoyed the show.

The nuns were in the spotlight themselves during lockdown when their singing during NHS Clap for Heroes captured worldwide attention.

The nuns’ singing was intended to lift the spirits in their Thornhill neighbourhood, but their versions of This Little Light of Mine and Give Me Joy In My Heart saw them appear on the BBC, CNN in America and Kensington Palace’s Instagram account, as well as news channels in Australia and Canada.

Sister Josepha, who plays the guitar and led the Clap for Heroes singing sessions, said: “We all loved Sister Act.

“It was a very professional performance and very inspiring. It made you laugh, but it was also quite moving in parts too.

“The musical reflects on choices we all made when we were younger and was a reminder of why we made those choices.”

Mother Superior Sister Adrienne added: “It was lovely to share the experience together. We’ve come through a lot over the last two years and I think sharing so much time together because of Covid has made us all more musically creative – so Sister Act was a perfect show for us.”

Sister Adrienne, who plays the flute, added: “The Fire Station is such a lovely venue and we were made to feel very welcome.”

The Sisters of Mercy have a reputation for actively supporting local charities and schools and are once again active in the Wearside community.

Sister Act the Musical is based on the 1992 American hit comedy film starring Whoopi Goldberg and follows the story of a lounge singer, Deloris Van Cartier forced to join a convent after being placed in a witness protection programme.

Kacey is in the third year of her degree and said: “It was a privilege and an honour to have the Sisters with us for our first performance.

“Once we saw them in the audience, I think the energy levels from the cast went up a notch. They inspired us.

“It was great to meet them after the show – they were so lovely and asked us loads of questions about ourselves and the show,” added Kacey, who is originally from Grantham and whose ambition is to carve out a career in musical theatre.

Third year student Nick Thompson played the role of Lieutenant Eddie Souther. He said: “It was a privilege to perform at The Fire Station. The venue has fantastic lighting and sound rigs and there is a lot of high-tech equipment.

“There are so many amateur dramatic groups out there that could utilise this space. It’s a fantastic venue for anyone in Sunderland to come and use.”

The Fire Station Director Tamsin Austin said: “It was great to welcome the Sisters from St Anthony’s Convent of Mercy to our venue, as well as the University of Sunderland students – and it was inspiring to see them mix so well after the show had finished.

“The Sisters loved the show and thoroughly enjoyed meeting the students, who were fascinated by their stories of their Clap for Heroes experiences.

“The show was a reminder that The Fire Station is a community asset, to be used and enjoyed by anyone and everyone on Wearside.”