Northern Spire to open to traffic 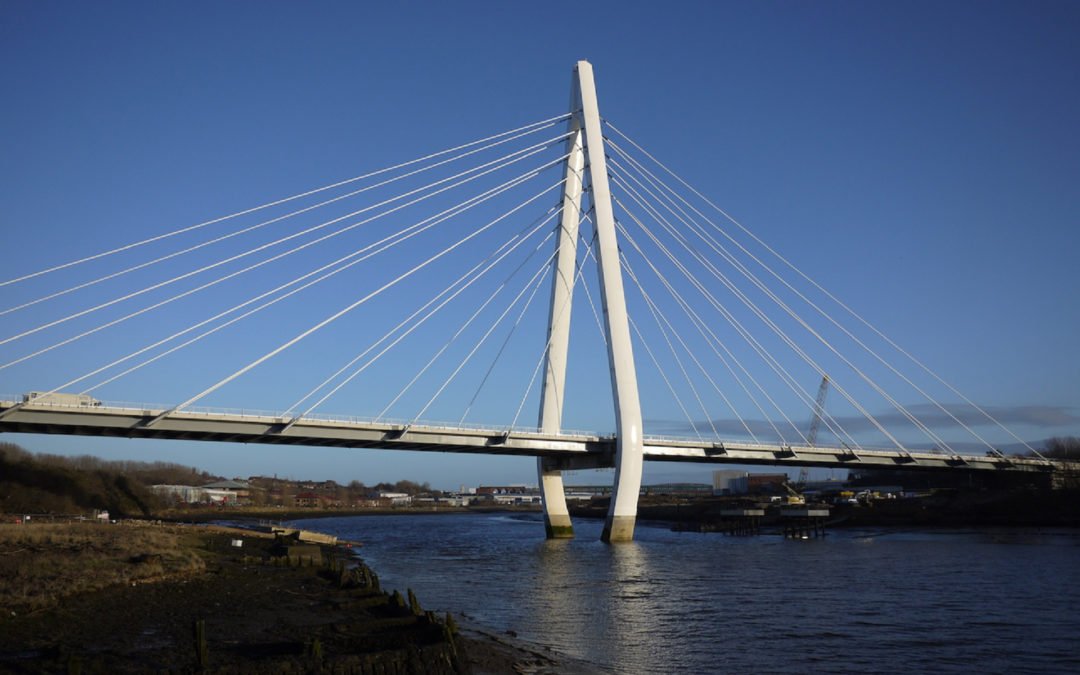 The majestic bridge across the River Wear, with its 105m central A-frame pylon, will be unveiled on Wednesday afternoon, with three Sunderland-built Nissan vehicles, including the record-breaking Qashqai and 100% electric LEAF, being the first to cross the landmark bridge.

However, pedestrians will have an opportunity to use the bridge before then. It will be open for people to walk across on Tuesday, August 28, from noon to 8pm. No vehicles will be permitted to cross the bridge, or use the new associated link roads, until it opens on Wednesday afternoon.

Leader of Sunderland City Council, Cllr Graeme Miller, said: “I am delighted that Northern Spire is opening to traffic next week. It looks stunning and is a great addition to the Sunderland skyline.

“It’s a proud moment for Sunderland. This bridge is a wonderful structure that firmly puts us on the map. I hope lots of people come out and take the opportunity to walk across it on Tuesday. They won’t be disappointed.”

Work began on Northern Spire in May 2015. During the three-year build programme, more than 2,000 people have worked on the project, clocking up more than a million work-hours. It has been built within its allocated £117m budget.

The bridge was scheduled to open in spring this year. However, the poor weather during the first four months of 2018 slowed progress on site, primarily the painting of the pylon, which required very still, dry, calm conditions, both for the painting and the use of high-level platforms that were required for the team to work from.

During the past few weeks the team has worked hard to maximise the recent spell of good weather to complete the painting of the centrepiece, which, as the highest structure in the North East, is twice the height of Nelson’s Column and bigger than Big Ben’s clock tower.

Sunderland City Council’s Head of Infrastructure and Transportation, Mark Jackson, said the bridge would have a lasting impact on the city.

“Not only does Northern Spire look impressive, but it will bring enormous benefits to the city, not least in making it easier and quicker for people to travel around Sunderland.” said Mark.

“It will reduce congestion and travel time, and will also open up huge areas of land along the River Wear for regeneration, whilst also attracting investment, boosting the economy and leading to more jobs.

“Northern Spire is a significant part of the future plans for Sunderland. The city is open for business and is looking towards a bright future.”

Northern Spire links Pallion to the south of the River Wear with Castletown in the north. It has been built as part of the council’s wider plan to improve the road network between the A19 and Sunderland city centre and Port of Sunderland.

It is phase two of a five-phase plan, the Sunderland Strategic Transport Corridor (SSTC). The next phase is a dual carriageway that will pick up where Northern Spire ends on the south side of the river, linking the new bridge to St Mary’s Boulevard, going under Queen Alexandra bridge, and is expected to be complete in 2021.

Stephen McCaffrey, Project Director for Farrans Victor Buyck (FVB) Joint Venture, which has delivered the bridge on behalf of Sunderland City Council, said the construction project – the biggest in the North East in recent years – had come with a number of challenges along the way, not least the weather, but completion was almost here.

“This is a huge moment for us, being so close to the opening of Northern Spire,” said Stephen.

“I think I can speak for everyone who has worked on the project, those who live locally and those from further afield, when I say that it has been a huge privilege to be involved, and we feel immensely proud.

“It’s been a major project that, at times, was both complex and challenging, requiring the skills and expertise of so many different groups of people. Bringing all those people together, sitting down and planning the project and the methodology to build it was one of the greatest challenges, but also one of the most satisfying. We are fortunate that we have had some very talented people working on this project, and it is those people who have made it a success.

“We hope people enjoy travelling over Northern Spire as much as we have enjoyed building it.”

David Abdy, Project Director for Sunderland City Council, said Sunderland’s new bridge was the culmination of decades of hard work, determination and perseverance by the council.

He said: “Pulling off a major construction project such as this, with the Government backing, funding and planning it requires, is an enormous task and is not something that can be done quickly, without a lot of strategic planning, and national, regional and local support.

“Northern Spire has been in construction for three years, but it has actually been in the planning for decades, so it’s wonderful to see all that hard work come to fruition.

“It has come a little later than planned, but I think people will agree that it has been worth waiting for.

“No one person or team could have delivered it on their own; it has been a huge team effort. I would like to thank everyone who has helped to make this bridge a reality, and I would like to thank those businesses and residents who are located close to the bridge, and commuters, who have been patient with us throughout the construction works. We really appreciate the understanding they have shown.”