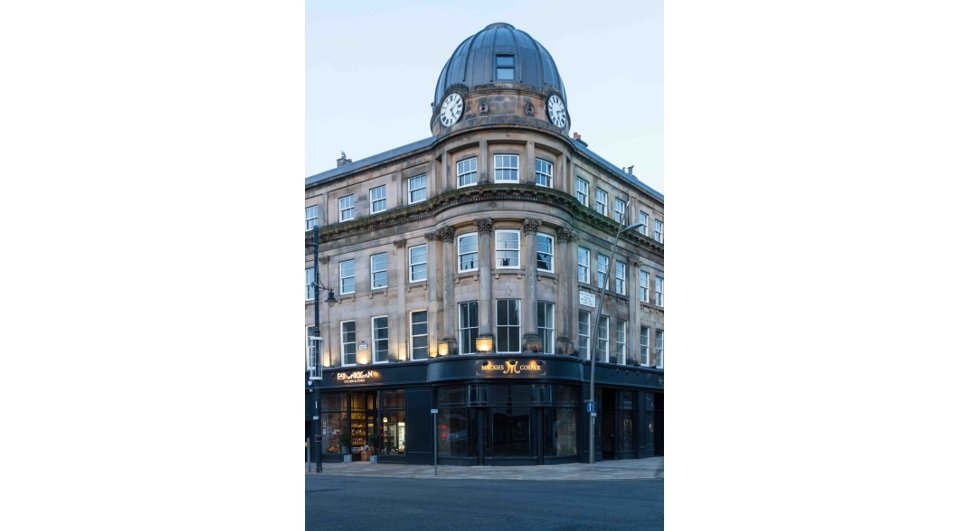 Built in the mid-19th century by local businessman Ralph Hutchinson, the elegant domed commercial building was a popular shopping destination and meeting place for generations of Wearsiders.

However, the Grade II listed building fell into disrepair during the late 20th century and from the early 2000s it had lain derelict, a ghost of its former self.

Fortunately, local property developers, the Kirtley family, decided to take on the challenge of breathing new life into Mackie’s corner, purchasing the property in 2017.

Their bold vision was to return Mackie’s Corner to its roots by redeveloping the site as a mixed commercial property with multiple retail outlets and office spaces.

Over the past year, this financial support has paid for essential repairs to the outside of the building including stonework, windows, beautiful new shop fronts, as well as the lead dome, which houses Mackie’s famous clock.

With the grant funded works now complete, Mackie’s is ready to open for business when lockdown restrictions on shops ease next month.

There are already a number of new tenants in place including Fat Unicorn, a delicatessen and The Sweet Petite, a bakery, which opened in December.

Further works will be completed by the Kirtley family to bring the whole building back in to use.

The restoration marks an important milestone for the on-going success of the wider Sunderland Heritage Action Zone (HAZ) initiative, which aims to rejuvenate the historic city centre.

“The new owners had recognised the potential this building has at the heart of our high street and at this crossroads with Fawcett Street.

“This is a project that the City Council and our partners at Historic England were very pleased to support and progress.

“Getting the clock restored was a big and visible step, and now residents can see what a difference the complete restoration works have made to the high street.

“Re-use of historic buildings are significant steps forward in helping to revive the high street.

“Mackie’s will again play a prominent role and with new businesses opening this is a promising vote of confidence for our city centre.

“We have investors and businesses who want to operate in our city and it’s important that when we have the opportunity we support them.”

Jules Brown, Historic Places Advisor for Historic England, said: “Mackie’s Corner has always been much more than just a building; it’s part of the soul of Sunderland.

“As one of the city’s most popular historic meeting places, we can only imagine how many first dates, secret get-togethers and tearful reunions have taken place under its gaze.

“We owe the Kirtley family a huge debt of thanks for having the vision and ambition to rescue this site from dereliction and secure its future for generations to come with our support.”

Alex Kirtley, owner of Mackie’s said: “We are pleased to see our vison for Mackie’s Corner becoming a reality now that the HAZ grant funded works have been completed.

“It has been a real labour of love and hard work for us as a family to save this iconic building.

“I feel that the Mackie’s Corner development is leading the way for independent businesses creating a vibrant city centre with a different offer.

“In the coming year we hope to push on with the rest of the renovation welcoming more creative businesses and jobs.

“There has never been a more important time to shop small and shop local, we would like to thank the people of Sunderland for their support.”

Further restoration projects under the HAZ Partnership Scheme are planned for later this year, including a new shop front for the Elephant Tea Rooms that, along with Mackie’s Corner, will significantly enhance the street scene in this part of the city centre and the historic high street.

Mackie’s Corner’s regeneration is part of a raft of city centre works underway, with a Holiday Inn Hotel under construction on Keel Square, as well as the Auditorium, which is taking shape next to the Fire Station.

Just across the road, City Hall is rising from the ground on the former Vaux brewery site and work on a new residential community and further commercial office spaces is set to get underway within months.

To stay up to date with developments in Riverside Sunderland, visit www.riversidesunderland.co.uk.