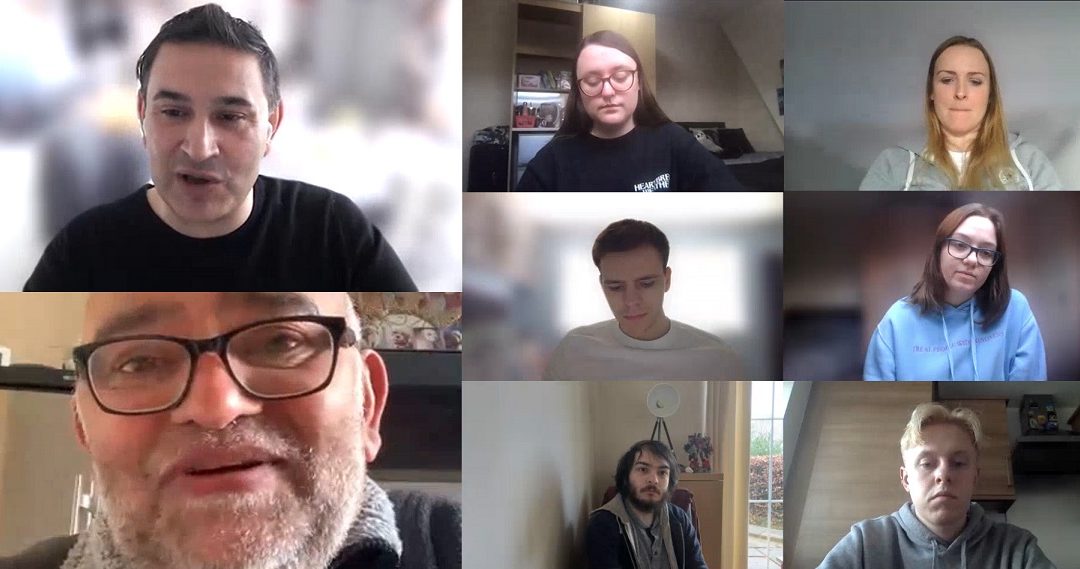 From Coronation Street to Indiana Jones – film and television actors alongside industry experts have given their time online to a group of Sunderland students hoping to carve out their own careers on screen.

Ensuring Screen Performance students at the University of Sunderland continue to get a first-class experience despite being in lockdown, academics designed a module project that would offer access to leading lights of the small and big screen, and result in filming their own live episode of much-loved soap Coronation Street.

In preparation for the project, 18 students have been taking part in online sessions with a number of principal actors including Emmerdale’s Bhasker Patel (Thunderbirds, Indiana Jones and the Temple of Doom), and Liam Fox (Emmerdale, Dinnerladies), and Coronation Street’s first disabled actress Cherylee Houston and Terence Maynard (Coronation Street, Edge of Tomorrow, Revolver, Reign of Fire).

Gary Stubbs, Programme Leader for MA Media Production (Film & Television), drew on his contacts to secure the sessions, thanks to his own experience of producing and directing TV programmes.

He said: “We needed to adapt our programme due to lockdown and wanted to make sure our students were getting the best experience and interacting with industry professional they might not otherwise get the chance to, at this stage in their careers.

“The professionals have been sharing their experience and tips of the trade when it comes to acting, directing, producing, and auditioning.

“Online learning has actually allowed us to open more doors to these people, especially as they’re often incredibly busy filming, and may struggle to fit a visit to campus in person in their schedules.

“Through platforms like Teams and Zoom their time is more accessible.

“It’s also important to ensure we make these interactions as interesting as possible, and our students have completely enjoyed the experience.

“They have gained the knowledge to help with their final project.”

The Screen Performance degree is tailored for students who want to equip themselves with a range of performance production skills, gaining experience that will launch their media career in front of or behind the camera.

The Second-Year students will be using the information they have learned throughout the sessions, as part of a week-long rehearsal, using scripts from previous Coronation Street episodes, culminating in a live show, that will be graded by their academics.

Each student will be assigned roles and responsibilities throughout the week in May, from acting, directing, costumes to vision mixing.

Students on the programme have been sharing their experiences of the project.

Sam Gofton said: “What I’ve personally gained is a different take on how to approach the industry.

“I have a better understanding of how to be a part of it all and what I can do to get my foot in the door.

“It’s helped me be more confident in where to take my career next!”

Jessica Pye added: “We were worried with us being on a practical heavy course (Screen performing) that it would be hard to get quality or useful lessons over zoom.

“Gary has done amazingly at solving this problem for us and I almost think we have benefited from the lockdown in a way.

“He’s set up zoom calls with working industry professionals over the last few weeks and onwards.

“People doing the jobs we want to be in with experience that really can’t be taught.

“From actors and directors who are currently working or have worked on some massively successful project to agents and casting professionals giving us insights into the industry we will hopefully graduate into.

“This last term has been so well thought out and delivered. I honestly believe Gary had turned what could have been a disappointing and unsuccessful semester into something we would never have had the opportunity to experience otherwise.

“It just goes to show that even with a pandemic an amazing lecturer can go above and beyond for his students!”

Katie Stubbs, the second-year student rep for Screen Performance, said: “The screen performance students have thoroughly enjoyed the Drama for Live TV 2 online sessions, the guest speakers we have had are all currently working on some of the biggest production in the UK ranging from Emmerdale and Coronation Street to big budget Hollywood movies.

“We have had sessions with casting agents, costume and props, producers, directors and principal cast.

“We have all found the sessions really helpful in expanding our knowledge of what it is really like to work within television and film and feel as though we now have a great insight into the industry.”