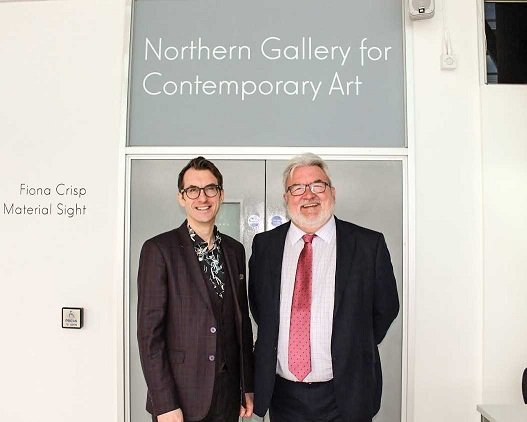 A ‘RED letter day’ for Sunderland saw the launch of an ambitious £60m programme to transform the city’s cultural life – on the same day a new home for contemporary visual art opened on Wearside.

Twenty Four Seven will also strengthen the city’s creative economy and increase the number of Wearsiders taking part in arts and culture. The project will run through to 2024.

At the same time, Sunderland Culture, the new company set up last year to strategically lead major cultural venues in the city re-opened the Northern Gallery for Contemporary Art (NGCA) in its new 3,000sq ft space within National Glass Centre, part of the University of Sunderland.

Not only are we launching an exciting new vision for the city’s cultural future with Sunderland Twenty Four Seven, we’re opening the NGCA in its new home at National Glass Centre.

“And on top of all that, it’s important not to lose sight that in a week’s time Sunderland Culture joins Arts Council England’s prestigious list of National Portfolio Organisations (NPO). So we’re also launching Sunderland Culture.

He explained that Sunderland Twenty Four Seven came as a direct legacy of the city’s bid to become City of Culture in 2021.

“Win or lose, we said we’d come back in the first part of 2018 with a plan for Sunderland’s cultural future. Twenty Four Seven is that plan,” Graeme said.

“What happened through the bid to become City of Culture was remarkable – the bid unleashed a tremendous energy in the city, a common focus and heightened our cultural ambition.

“We may not have won the title City of Culture, but much of what we envisaged and planned will happen anyway through Sunderland Culture.

We don’t need a title to achieve our ambitions,” he added.

Keith Merrin, Chief Executive of Sunderland Culture, said: “Today is a hugely exciting day for us, and for the city.

“The openings are a signal of our intent to improve the cultural offering in Sunderland, for the enjoyment of Wearsiders and those living in the wider north east.

Sunderland Culture’s Twenty Four Seven will be the key driver of change and partners across the city have already secured £40m of the £60m needed to deliver the programme and we’re very confident of raising the remaining £20m.

“Twenty Four Seven will incorporate the City of Culture’s themes of Light, Friendship and Inventiveness and will help add to the growing sense of cultural confidence in the city, particularly among young people,” he added.

Coun Harry Trueman, Leader of Sunderland City Council, said: “We sadly missed out on the bid, but we can take comfort in the fact that the Minister said we came very close. It was a great effort from the city.

“We need to continue the legacy. We can’t just give up and make do with what we’ve got. We’re an ambitious city and we need to take that forward.”

In its new home within National Glass Centre, the NGCA will bring new audiences to contemporary art.

The new gallery has been created with the support of University of Sunderland, Arts Council England and Sunderland City Council, and in its first 18 months it will celebrate British artists whose work has been created on continental Europe.

For the first exhibition, Fiona Crisp has been working with the Laboratori Nazionale del Gran Sasso in Italy to investigate the way in which we imagine the frontiers of fundamental science

Young Glass is an exhibition created in collaboration with the Danish Gallery, Glasmuseet Ebeltoft, presenting the finest examples of work by international, early career artists working in glass.