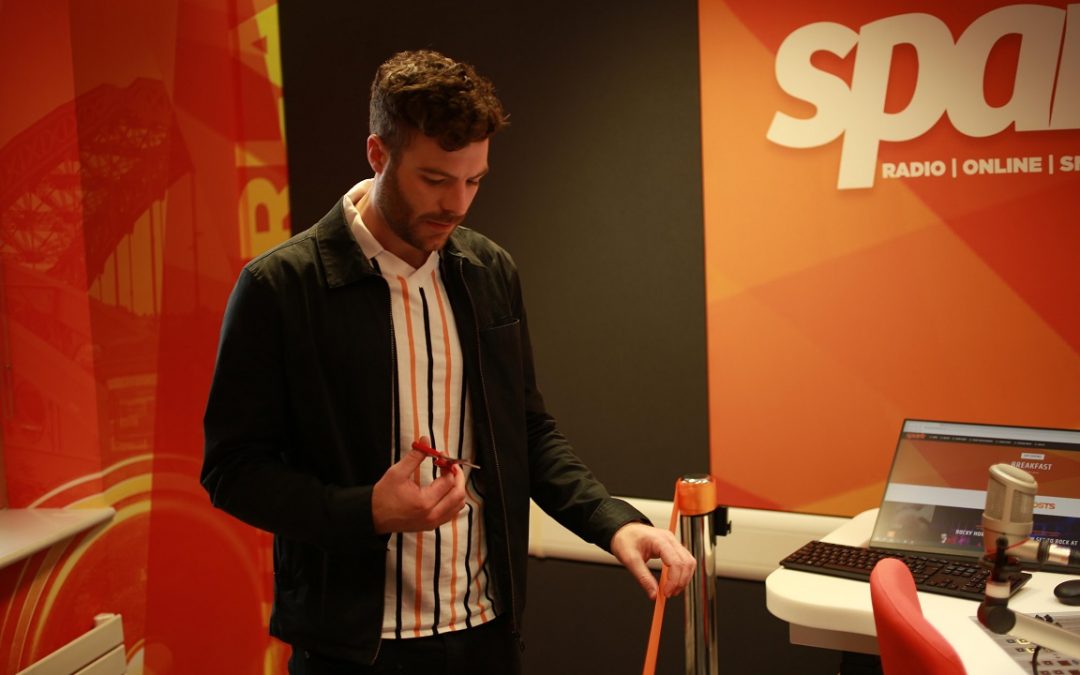 BBC Radio 1 presenter Jordan North has gone back to where it all began – as he cut the ribbon to the University of Sunderland’s new state of the art Spark studio.

Speaking on Spark Jordan said: “If this studio was here when I was a student, I would never have left.

“I mean, I never left when I was here, I was here all the time, doing every hour God sends but this is a state of the art, proper radio studio and I’m really proud and very honoured to be here and be asked to open it today. It’s fantastic, it really is.”

From broadcasting from his Sunderland bedroom during the winter storms of December 2010, Jordan has gone on to become king of the airwaves having recently taken over a prime slot on Radio 1.

Jordan, 31, admits he will always have a special place in his heart for Spark, though.

“I love the place and I love the people and I’ve got a lot of time for Spark and try to give some of my time now to the university and to the station,” he said.

“The thing I learnt the most was you’ve got to try new things. I literally did every show, I did a music show, I did a talk show, I did a Sunday afternoon show and then I started doing entertainment radio and that’s when I learnt about the presenter that I wanted to be.”

Jordan, who grew up in Burnley, Lancashire, added: “My one bit of advice and the lesson I learnt was ‘try everything,’ try producing, try doing OBs, try the technical side, try working on the website and see what you want to do at the radio station, and for me, it was making funny, entertaining radio, and I’m still trying to do that now. Trying.”

Lee Hall, Head of the School of Media and Communication at the University of Sunderland, recently shortlisted as University of the Year, in this year’s THE – Times Higher Education – annual awards, said: “Jordan is a great ambassador for the University and a shining example of how far talent, hard work and making the most of great opportunities can take you.

“I’m proud the University of Sunderland is such an important part of Jordan’s story. It’s fantastic to have him back in the Spark studio where his journey began.

“We continue to invest in our facilities to help the media stars of the future develop the skills they need to succeed in the creative industries.”

Lee added: “Where Jordan has succeeded, I am confident many more will follow.”

Richard Berry, Senior Lecturer in Radio at the University of Sunderland, said: “Jordan was a big part of Spark back in the days when we had a tiny office and had to juggle studio use around classes, so to welcome him back as a Radio 1 presenter to show him such a vibrant and modern studio is fantastic.

“Everyone who has seen the studio has been genuinely excited about using it and I can’t think of anyone better to come and cut the ribbon than Jordan.

“He’s not only a big supporter of the University but he’s a great example of how Spark can help students achieve their dreams.”

In the final year of his degree at Sunderland, Jordan went on to win Bauer Radio’s competition to find the next generation of talent and landed his own Sunday show on The Hits Radio.

As well as Radio 1, Jordan has worked for Rock FM, The Hits and Capital Manchester.

Last year, Jordan was a contestant in the 20th series of ITV’s I’m a Celebrity…Get Me Out of Here! He finished second.