Get your geek on in Sunderland 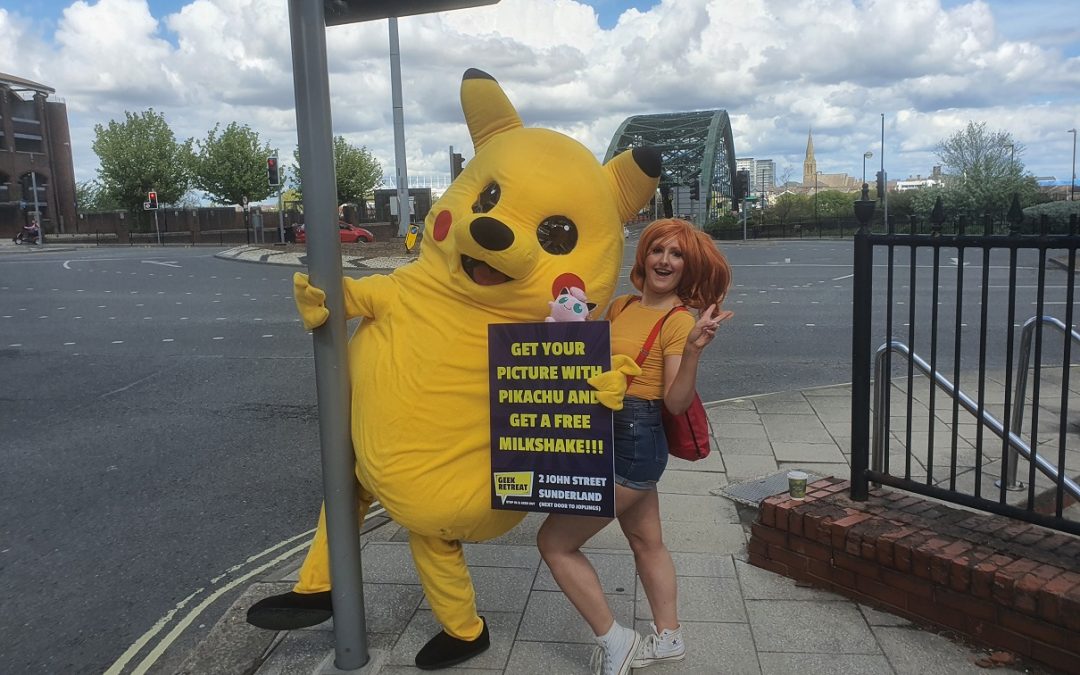 Fans of comics, characters and coffee can now get their fix at a newly opened gaming café and shop at Sunderland city centre.

And to celebrate the full opening of Geek Retreat at John Street, eagle-eyed fans can join in a Pokémon Polaroid hunt – and be rewarded with a free milkshake.

Since the store opened last month it has been a huge success and franchisees Stewart Brass and partner Laura Green are delighted with the response.

Lovers of everything from Marvel and DC comic strip superheroes and sci fi villains, to animé, Warhammer and even traditional board games and models have flocked to the store.

This week Geek Retreat is finally able to open its café, offering a menu of US-style snacks, hot and cold food, coffee and milkshakes.

And to mark the occasion the owners have organised a week of appearances by favourite characters and the opportunity to hunt for the ten Pokémon Polaroids which are hidden around the city centre at ‘Pokéstops.’

“We want people to look for the polaroids and when they find one, take a socially distanced picture with one,” said Stewart.

“And then if they bring it into the store they can claim a free Pokémon Plushie.”

Characters which will be out and about on the streets of Sunderland this week include Super Mario’s Mario and Luigi, The Mandalorian, Baby Yoda and Bruno.

On Friday anyone visiting the store between 4pm and 6pm will be able to enjoy a magic show, with Mando and Bruno doing one last city tour on Saturday.

“We just wanted to make this a really special week now that we’ve been able to fully open,” said Stewart.

“We hope that everyone will enjoy seeing their favourite characters out and about and will also keep their eyes open for the polaroids.”

From this week (17 May), the 63-cover venue also plans to host tabletop role play games and card games, with gamers also able to take part in official tournaments for brands such as Pokemon and Dungeons and Dragons.

Stewart and Laura also plan to host quizzes, comic book signings and install arcade machines and to hold autism-friendly afternoons in the coming weeks and months.

Sharon Appleby, Head of Business Operations at Sunderland BID, said it was “great to welcome the first Geek Retreat branch to Wearside.”

“The franchise has absolutely cornered a niche but sizeable market,” she said, “and we are delighted that Sunderland gaming fans can now enjoy their hobby without having to leave the city.”

Geek Retreat’s opening hours can be found at https://sunderland.geek-retreat.com/