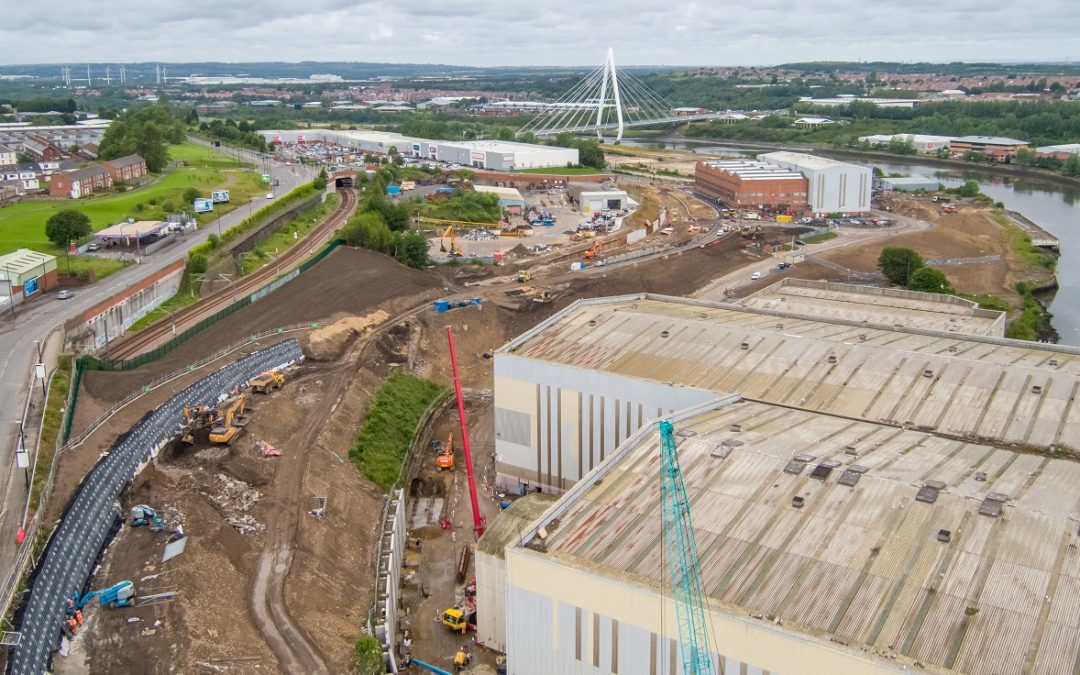 That is according to new figures released by one of the North of England’s largest contractors, Esh Construction.

The economic impact of works on council-led projects – Sunderland Strategic Transport Corridor (SSTC3); the International Advanced Manufacturing Park (IAMP); Port of Sunderland; Greenwells Quay, the city’s new football hubs; Potter’s Hill and the Minster Quarter – has been calculated based on the money spent with local suppliers and sub-contractors who have supported Esh on the schemes to date.

Sunderland residents make up 15 per cent of Esh’s workforce and the contractor recently opened an office in the city.

The seven schemes have delivered long term advantages for Sunderland, something council bosses have said is a key priority for them on all regeneration projects they lead.

Councillor Graeme Miller, leader of Sunderland City Council, which has worked with Esh on projects worth an estimated £75m since 2018, said that the community would feel the benefits of the council’s investments for years to come.

He said: “Community wealth building through commissioning that delivers opportunities for local people and businesses is something we committed to some time ago, and we’ve been absolutely steadfast in that commitment.

“Working with partners like Esh, who share a commitment to sourcing locally wherever they can, has allowed us to maximise the local impact of our investment projects and their work with our communities, including a schools programme that will demonstrate to our young people the range of careers available to them in the city, will do much to raise aspirations in Sunderland too.  It’s a very fruitful partnership.”

Esh was appointed to deliver the SSTC3 project – a £35m contract as part of a £70.8m programme to improve connectivity in the city  – which is due to complete in Autumn 2021.

The company has also won a number of competitive tenders to support with infrastructure works at IAMP and Potter’s Hill – a housing scheme close to Chapelgarth – as well as work at Port of Sunderland, the city’s new football hubs, and the High Street West area of the city.

Ross Markwell, Director of Business Development at Esh Construction, said: “The importance of protecting the ‘local pound’ is paramount in the current climate – as a local contractor we strive to deliver economic benefit for our clients and their communities.

“Across these seven regeneration schemes, we have re-invested 16.5% of the total project spend back into Sunderland’s economy through responsibly procuring local suppliers and sub-contractors.”

The projects delivered by Esh are just seven schemes in a wide-ranging programme of major investment underway across Sunderland.

The Beam – the flagship development on Riverside Sunderland – completed last year, and the second phase of work on the former Vaux Brewery site is already underway, with construction of a new City Hall for Sunderland progressing at pace.

Investment giant Legal & General has committed to fund the building, as well as two further offices in a £100m boost announced last year.

Among other exciting new developments is a business centre in the former Gilbridge Police Station, that will see £3m pumped into its revamp; a 120-room Holiday Inn Hotel on Keel Square; and a 450-seater auditorium, that is now under construction in the city’s Minster Quarter.

Mackie’s Corner will also gradually become home to more retail and commercial businesses, after being taken over by a Sunderland developer, the historic Elephant Tearooms are reawakening, as a Local History Library and just meters away, a new business centre is taking shape in the former River Wear Commissioners Building.

The improvements to the city centre are part of a plan to boost the number of people living and working in the heart of the city, creating a stronger daytime and evening economy.

Stunning plans for Riverside Sunderland unveiled a vision for a new urban quarter on both sides of the Wear, that will be connected by a footbridge that will close the gap between the city centre and the Stadium of Light.

Among other major improvements being mooted is work on the city’s train station, which would transform the welcome to the city.

The city’s coastline is being boosted by new leisure venues including a STACK at Seaburn, a new inn with rooms and improvements to old buildings that pepper the coastline.

And housing schemes are rising from the ground across Sunderland, as part of the council’s ambitious plans to build more than 7,000 new homes in the next decade.

Councillor Paul Stewart, cabinet secretary at Sunderland City Council, said: “With every project we deliver in the city, we explore the potential to gain added value through local commissioning and supply opportunities, and in particular, we are keen to see them deliver job opportunities for our people, both during the construction phase and when they are completed.

“Projects like those we have commissioned Esh to undertake bring about major benefits for our people, delivering the maximum possible return for every pound spent, and offering sustainable employment opportunities for our young people.

“We are building a proud record and we’re determined to keep this momentum as we continue to push ahead with exciting regeneration projects across Sunderland.”