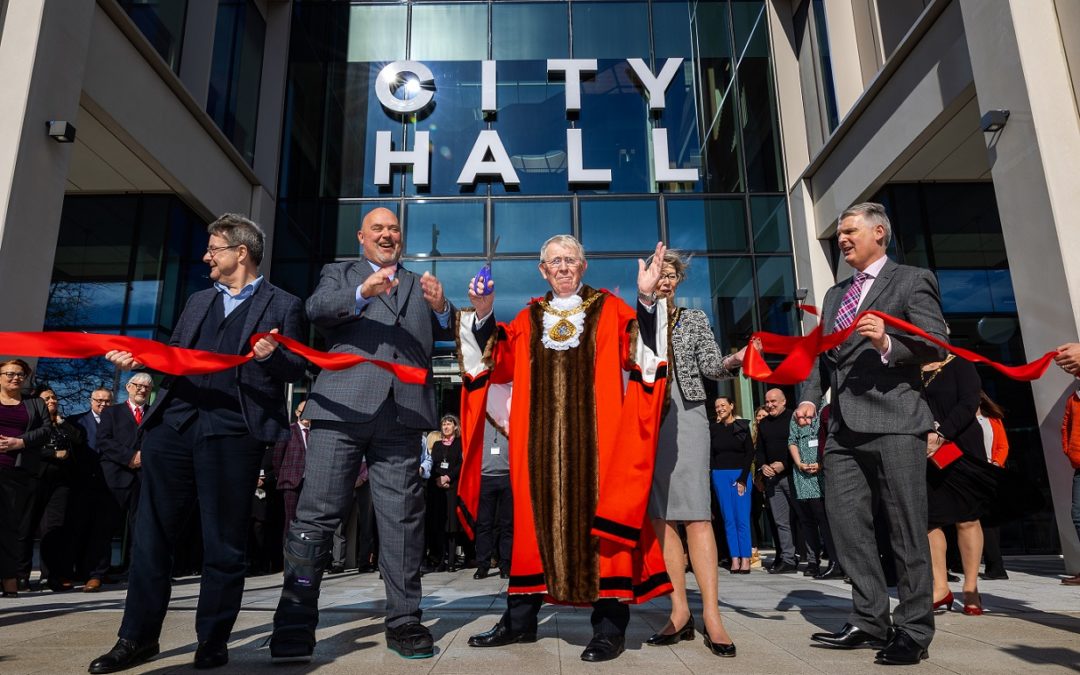 Sunderland’s City Hall has officially opened at a ceremony today.

School children, dignitaries, city businesspeople and council staff were among the invited guests at City Hall for an event to celebrate the opening of this important new civic hub.

A choir of Sunderland schoolchildren from East Herrington Primary Academy and Fulwell Junior School performed for guests, and the Mayor of Sunderland, Councillor Harry Trueman, carried out the traditional ribbon-cutting, as the 200,000 sq ft space – that will be home to a range of resident support services – was declared open.

Legal & General’s corporate affairs director, John Godfrey, was also present at the event, with the institutional investor having backed City Hall and two other Riverside Sunderland offices to the tune of £100m.

Other guests included chief executive of Gentoo, Nigel Wilson, and Education Partnership North East leader Ellen Thinnesen, with both organisations set to take up space in the building alongside the Department for Work and Pensions.

Mayor of Sunderland, Councillor Trueman said: “Despite the challenges presented through a national pandemic over the past two years, we have not allowed this to halt our progress as a city and our resilience and determination is paying dividends with buildings such as these opening at Riverside Sunderland.

“A vital services point including housing, employment and benefits, City Hall is the city’s shop window, with facilities for civic events and a marketing suite to entertain prospective investors.

“Its location, in the heart of the city centre, offers excellent access to all the main transport nodes with an array of high-quality retail and leisure facilities on its doorstep.

“Sunderland is a city undergoing a transformation not seen for generations, and I think I speak for the entire city when I say how excited we are to be driving this exciting journey which will deliver job opportunities and prosperity for generations to come.”

The council has started a phased return to the office for staff, with City Hall – which stands at the heart of the transforming Riverside Sunderland urban quarter – providing a flexible hub for council officers and members.

A range of people-focused services started operating out of City Hall last year, including the council’s Customer Service Centre, with public-access computers available to enable residents to make benefits applications and access other online services from the building’s open foyer.

The venue has also started to host weddings, as well as a range of other public and community events.

Councillor Graeme Miller, leader of Sunderland City Council, who was at the ceremonial event to see the building officially opened, said: “Many of our residents have made the switch to online services during the pandemic, so won’t yet have seen this magnificent building.

“It’s an incredible space, and one that will transform the way we support our residents when it is fully-occupied, with a wide range of services under one roof.

“We were delighted to welcome members of the public and local schools, as well as a number of our partner organisations, as we declared City Hall open and look forward to seeing this civic hub serve the people of Sunderland for years to come.”

The council has fully vacated the former Civic Centre, paving the way for its demolition, with plans afoot for the creation of a new residential community on the edge of the city centre.

The building is one of a number of large-scale development projects progressing in the city centre, part of an ambitious vision to double the residential population in the city centre and increase employment by 50 per cent and fuelled by the backing of Legal & General.

Nigel Wilson, CEO of Legal & General, said: “I’m a firm believer that doors lead to doors and once one opens, many more will reveal themselves.

“Our confidence and backing of Sunderland has certainly stimulated investor confidence in the area that is translating into genuine transformation.

“I’m absolutely thrilled to see the progress the city is making, and it’s exactly the affect we hoped our backing would have on the city centre.”

Patrick Melia, the council’s chief executive, said: “We’re proud to officially open this building in the presence of key partners, and, perhaps most importantly, in front of Sunderland residents and children.

“This building is for them.  It is about ensuring we meet residents’ needs now and in the future, and it’s wonderful to officially declare it open and to see the reaction it gets from people who visit it.

“This is a statement of our ambition for Sunderland, and I think the fact we have a world-class place from which to support and enable our residents, speaks volumes about the council we want to be; the council we are.”

During construction, developers Bowmer & Kirkland (B&K) delivered on a range of social value commitments that ensured that City Hall made an impact even ahead of its opening.

A total of 179 weeks of work experience was delivered on site. The project enabled the upskilling of 37 workers, who completed a total of 257 weeks of training.

Forty-one apprentices worked on the project and 28 new employment opportunities were created during construction – with available roles filled by people previously unemployed, three of whom had been out of work for over 12 months.

In total, 1,790 operatives were inducted on site, with 12% from Sunderland and 68% within the North East.

And local businesses benefitted too.  In total, over 66% of subcontractors were from within 30 miles of the site, meaning £41m was reinvested into the regional economy – 82% of the project spend.

To stay up to date with progress at City Hall and other Riverside Sunderland developments, visit www.riversidesunderland.com or follow @RiversideSund on social media.