A career in pharmacy forged by determination 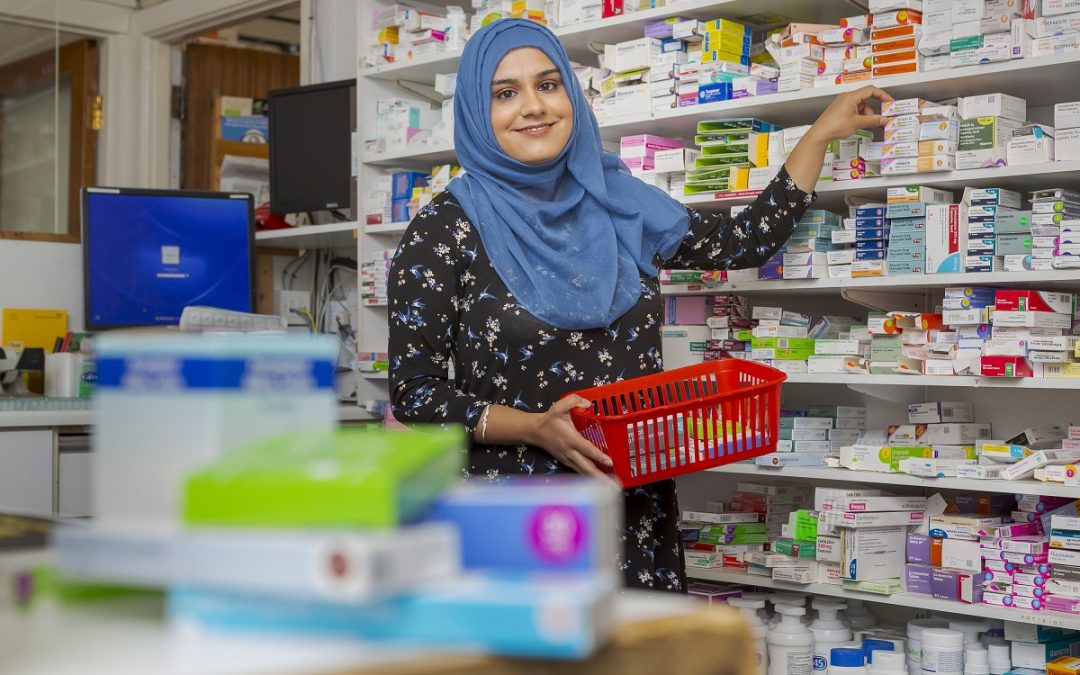 Taiyyibah Irfan’s life ambition to become a pharmacist has been a gruelling journey of heartache, loss, illness, and setbacks – but sheer determination has led to her achieving her career goals as well as an annual award for showing care and compassion.

Taiyyibah now begins her role as a pre-registration pharmacist in Gateshead after graduating from her MPharm Degree at the University of Sunderland.

Although it has taken almost seven years as she coped with the death of her father and cared for her sick mum, lecturers have been so impressed with her dedication that they nominated her for this year’s Jemma O’Sullivan Award for Care and Compassion in the Practice of Pharmacy.

The award is presented each year to a student who has demonstrated these qualities during their degree course.

Pharmacy student Jemma O’Sullivan was just 22 when she was killed in a motorway crash ten years ago; as a lasting legacy Jemma’s parents, Vincent and Margaret, sponsor this special award to a graduating student.

“I literally cried for three hours when I was told I’d received this award,” said Taiyyibah, 27, from Gateshead.

“It was overwhelming. I never thought I’d reach this point, there were so many up and downs, but I just kept going, taking care of mum and my little brother.

Taiyyibah had become her mum’s carer from age seven after she became sick with abdominal issues, as her father was still living in Pakistan despite numerous Visa applications to join his family were rejected by immigration officials.

The family remained separated and her mum’s health issues were to last more than a decade before she was eventually diagnosed with Hepatitis C, and chronic appendicitis and various other things.

“It was a very scary time. Mum had one injection and 35 tablets to take each week. The side effects were similar to someone having chemotherapy with her hair falling out and feeling severely tired.

“I had just finished my GCSEs and was starting my A-levels whilst mum was having treatment and I was looking after my little brother too at the time.

“It all became too much for me and my A level results suffered and I failed to get the grades I needed to study a pharmacy degree that I had always wanted.

“I was devastated and didn’t then have a back-up plan.”

Taiyyibah was about to begin a teaching degree in Bradford, when a call came though from Sunderland that a place was available on the Biopharmaceutical Science with Integrated Foundation Year, which would lead to the pharmacy degree (MPharm).

The student sailed through the course, despite her mum’s health taking a turn for the worst and spending time in and out of hospital and went on to complete the first year of the degree.

But by second year Taiyyibah said: “Mum’s health got worse. This resulted in countless hospital appointments, scans and tests.  Due to all this, I ended up having to re-sit the entire second year in 2015-2016.”

One of her crucial exams also had to be retaken, and she became an external student for the year 2016-2017.

Unfortunately, again there was to be more family heartache in September 2016.

“My father had a sudden heart attack; we flew out to Pakistan overnight as he was in a critical state and needed a triple bypass urgently.

“We then stayed there for four months where I was caring for both mum and dad.

“It was extremely difficult to get the right treatment and procedure for my dad.

“I was a 24-hour, around-the-clock nurse for my father, taking care of all his needs.

“This was exhausting for me physically, mentally and emotionally, but I was running on autopilot.

“We came back to the UK in January 2017, after my dad was well enough to do most of his own personal tasks.”

However, in March 2017 his health unexpectedly deteriorated, developing peripheral vascular disease which progressed very rapidly causing reduced circulation to both his legs and feet below the knee. He lost all mobility and became wheelchair bound.

Shortly after this news he suffered three strokes in a space of two weeks.

Finally, a CT scan discovered a clot in his heart which had fragmented and had spread through his body.

Within weeks he passed away because of a pulmonary embolism at just 43 years old.

Still mourning her father, Taiyyibah bravely began her third year in 2017, but again her mum’s health suffered when she was diagnosed with osteoarthritis in her feet.

The student failed her exams following a panic attack, and during the resits, the pressure became too much.

She said: “I ended up breaking down and went through a major bout of depression for two weeks as I kept thinking I had failed, I have been through so much and have never experienced anything like I did for those two weeks.

“It took me a lot of time to get back on my feet again. My family, cousins and friends really motivated me to get out of bed and urged me to get help and aided me to come back stronger to complete my degree.”

But today it’s a different story, as Taiyyibah settles into her full-time role at Lobley Hill Pharmacy, where’s she’s been working part-time, even during the Covid 19 Lockdown, becoming a key worker and supporting the staff on the frontline of the crisis.

“I wanted to help as much as I could and I must have done something right, as I am now beginning my pre-reg here, it’s fantastic!

“My mum is so proud of all I have achieved. I can’t thank the academics in those final years for all their patience, support and understanding, there were times I nearly quit, but so glad I didn’t give up.”

Lynzie Middleton, Senior Lecturer in Clinical Pharmacy, said: “Taiyyibah has been through so much during her time with us, and really felt the pressure at times, but she’s never given up and has worked so hard in this final year.

“She thoroughly deserves this accolade and embodies everything it represents.”

Lindsay Parkin, Senior Lecturer in Pharmacy Practice and Clinical Therapeutics, added: “We are all incredibly proud of Taiyyibah’s achievements and she thoroughly deserves this award.

“She has had so much to deal with, as carer of her mum and dealing with her father’s death, to working on the frontline during the Covid 19 crisis, she’s a remarkable and determined individual and we wish her a successful career. She is going to make a wonderful community pharmacist.”

Jemma O’Sullivan Award for Care and Compassion in the Practice of Pharmacy.

Taiyyibah will be presented with a special glass gift as well as a cheque to support her future career. This is the sixth year that the award has been presented.

A large glass memorial, created at National Glass Centre, has also been permanently placed in the foyer of the University’s Sciences Complex.

Recipients of the annual award have their names engraved onto a plaque that stands next to the memorial.

Jemma’s parents were very keen that the award didn’t necessarily reflect the top academic performance but was about demonstrating the caring and compassionate qualities of a pharmacist.

These were the qualities Jemma possessed; a friendly person who was easy to talk to.

Jemma, from Limerick in the Republic of Ireland, was a passenger in a Citroen Berlingo on the M18, near Warmsworth, Doncaster, in September 2010, when a lorry crashed into it.

The driver, who was texting at the time, was jailed for five years after admitting causing death by dangerous driving.

Since her death her family and friends have raised more than £100,000 to support a hospice pharmacy in South Africa treating people with HIV/AIDS.

Her father Vincent said: “The year before she died, Jemma had volunteered at an HIV hospice crèche, where there were 300 children, 80 per cent had HIV/AIDS, next door to a hospice in Pretoria; she had an incredible experience there and learned to listen and talk to patients, that was her great strength.”

“We decided to support the Leratong Hospice in Jemma’s memory, raising £100k, and renovated the pharmacy, stocking it with drugs for the next four years.

It’s officially been called ‘Jemma’s Pharmacy’, there’s a lovely plaque at the site.”

He added: “We were also supported by South Yorkshire Police in an initiative called Jemma Bear.

“Some 500 teddy bears have been produced in memory of Jemma and will be used by police family liaison officers across South Yorkshire to comfort children involved in collisions on the roads.

“After discussion with South Yorkshire Police, we felt a toy bear may be a comfort and a perhaps a distraction to children trying to deal with shock or possible grief.”

If you would like information about studying at the University of Sunderland, Clearing hotline is already up and running and students can contact the friendly University team directly on 0191 515 3000 or go online here.